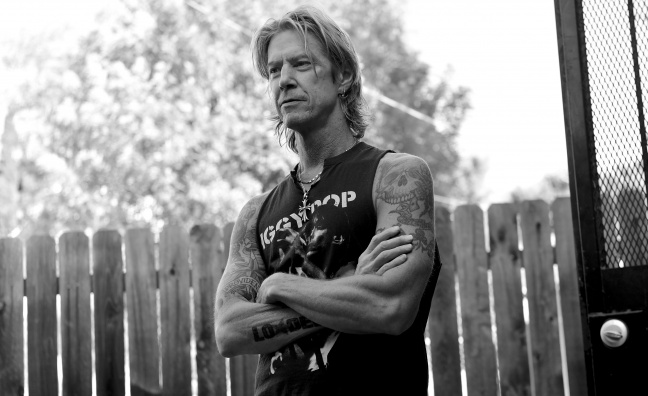 McKagan, who plays two nights in London at Tottenham Hotspur Stadium with GNR in May, released his third solo album, Tenderness, last year.

Best-known for his roles as bassist for GNR and Velvet Revolver, McKagan most recently worked with Ozzy Osbourne on his new album Ordinary Man, which debuted at No.3 in the US and UK last week.

Duff's musical DNA as a songwriter and artist runs deep

“We're incredibly excited to welcome Duff to the Concord Music Publishing family of songwriters,” said Tom DeSavia, SVP of A&R/artist relations at Concord Music Publishing. “In addition to his well-earned reputation as one of rock'n'roll's pre-eminent musicians, Duff's musical DNA as a songwriter and artist runs deep, culling inspiration from his earliest punk and rock & roll beginnings, through his deep understanding and appreciation of pop, soul and American roots music. We're thrilled to become a part of his ongoing exploration of creativity."

In addition to his solo projects and work with Guns N’Roses’ and Velvet Revolver, McKagan has been associated with a number of hit rock bands including Alice in Chains, Jane’s Addiction, and most recently, The Hollywood Vampires. Over the span of his career, McKagan has formed two of his own super groups, Neurotic Outsiders and Loaded.

“I’m very excited to join Concord Music Publishing at this phase in my career,” said McKagan.