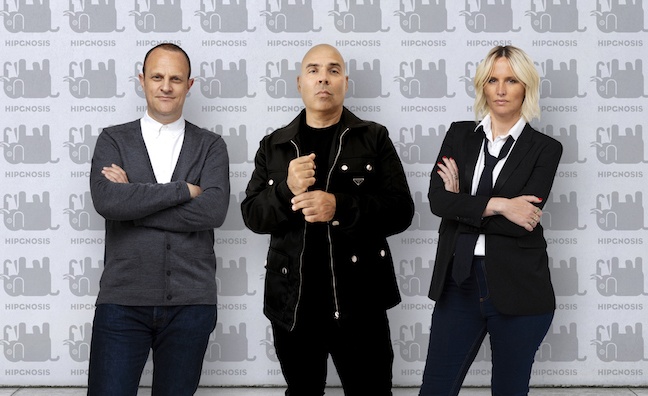 Hipgnosis has reported its interim results for the six months to the end of September 2020 – a period when the fund acquired a further 44,545 songs.

As of 30 September 2020, the company had invested approximately £1.18 billion through the acquisition of 117 catalogues in total. It now manages 57,836 songs.

Following the interim results, the Hipgnosis board subsequently announced that it is exploring further equity fundraising options as it is in “active discussions” on acquiring catalogues valued at £1 billion.

During the period, £426.4 million of gross equity capital was raised through secondary placings of C shares in July 2020 and Ordinary shares in September 2020.

Recent signings include catalogues from Kobalt, Steve Robson and Chrissie Hynde, as well as the acquisition of Big Deal Music (now rebranded to Hipgnosis Songs Group).

Merck Mercuriadis, founder of Hipgnosis Songs Fund Limited and The Family (Music) Limited, said: “2020 has been a year that the world never contemplated, as both society and the economy have been devastated by the pandemic. It is therefore a wonderful feeling to be able to give our investors, who have given us incredible support, and the songwriting community, who have entrusted us with their incomparable work, an excellent set of results that validate their trust and faith in Hipgnosis.

“We’ve been one of the FTSE 250’s biggest yielders and have now reached a £1.25 billion market cap. The case for proven songs as the best uncorrelated asset class gets stronger every day. We have an incredible pipeline and are very excited for 2021.”

The company co-owns 10 of Spotify’s Top 30 most played songs of all time. The 63 catalogues acquired during the six months include Fleetwood Mac’s Go Your Own Way, Steve Winwood’s Higher Love, Blondie’s Heart Of Glass, 50 Cent’s In Da Club and Mariah Carey’s All I Want For Christmas Is You.

The fair value of the catalogues, as determined by the independent valuer, increased by £114.2m (up 10%) during the period, excluding losses of £23.3m due to unfavourable movements in exchange rates. The increase was based on factors including streaming revenues starting to be received from emerging digital platforms, including TikTok and Peloton.

“The year 2020 has been one of challenges which the world has never before experienced, with a devastating impact on society and much of the economy as a result of the Covid-19 pandemic,” said Mercuriadis. “We are grateful that despite this it has been a period of profound positive performance and progress for Hipgnosis, which is reflected in our excellent set of results.”

He added: “We are delighted that music valuers are starting to reflect the true value of music as an asset class and expect this trend to continue as streaming continues to grow and music revenues continue to prove their stability.”

Mercuriadis also addressed the impact of the pandemic on streaming.

“Lockdown has also significantly changed music consumption, with more listeners reaching for songs they grew up with for comfort and escape,” he said. “This leaves us perfectly placed during these challenging times with a portfolio concentrated around incredibly successful and culturally influential proven hit songs that are in high demand.

“Don’t Stop Believin’ by Journey, as just one example from our catalogue, has been streamed at least 10,000,000 times per week every week since March up to the present moment. Data from the H1 2020 global music revenues have confirmed our expectations that the growth in revenue from both existing (Spotify/Apple) and emerging (Peloton/TikTok) streaming platforms is more than offsetting shortfalls elsewhere brought on by the pandemic.”

Hipgnosis has also appointed Tony Barnes, former Virgin EMI director, as EVP of digital and innovation. The company now has more than 70 people globally, including the advisory board.

“In little over three months, they have already had a significant impact on the business, ensuring accurate ingestion of both the income streams and the active management of our catalogue of songs and have proven how effectively we can increase useage and revenues of our incredible hit songs when they are given the attention and resource they deserve,” said Mercuriadis.

Hipgnois has seen progress on sync, which now accounts for 14% of overall revenue. Blondie’s One Way Or Another features in this year’s M&S Christmas TV advert.

The acquisition of Big Deal Music will improve efficiencies in the collection of payments by enabling Hipgnosis to self-administer catalogue in the UK.

“This will generate savings of at least 1-1.5% of administration costs and also put us in a position to negotiate directly with the digital service providers as well as giving us a seat at the table in the various big money settlements that are taking place with the likes of Peloton, TikTok and Facebook,” said Mercuriadis.

He said developments on vaccines have “given us all hope that the pandemic will soon be behind us”, but acknowledged the challenges ahead.

“I believe that we are well positioned to weather them all and to continue to establish ourselves as not only an essential opportunity for investors, but also as one of the most important catalysts transforming the song industry and the songwriter’s place in it globally,” said Mercuriadis.