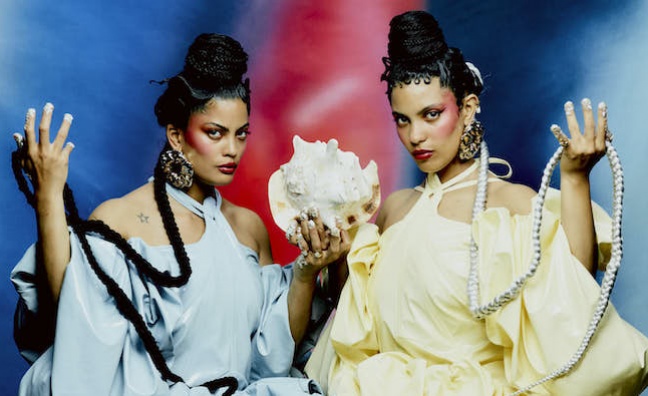 Afro-Cuban French twins Lisa-Kaindé and Naomi Diaz, also known as Ibeyi, have signed a worldwide music publishing administration agreement for their back catalogue and future works with Downtown Music Services.

The duo, who play Yoruban music fused with modern jazz, pop, soul and hip-hop, are signed to XL Recordings. The label’s founder Richard Russell produced their second album, Ash, and is at the helm for their new, as-yet-untitled album, which is scheduled for release next year.

They released their eponymously titled debut album in 2015. Their follow up, Ash, followed in 2017 and was nominated for the IMPALA European Album of the Year Award.

Laura Bedikian, senior A&R manager at Downtown Music Services, said: “Since their debut album, I have been following Ibeyi’s journey very closely, they are part of these few artists from France who take it to another level and put themselves on the international map. It’s a huge honour to have their trust to bring them even further now. And it’s a daily pleasure working with Lisa-Kaindé and Naomi and the talented team around them.”

Lisa-Kaindé and Naomi Diaz are the daughters of the late Cuban percussionist Anga Diaz, who received a Grammy award for his work with the Latin jazz band Irakere, and was a member of  the Buena Vista Social Club.

In 2016, the twins appeared in the short film for Beyoncé's album Lemonade. Their music and original compositions have been featured in the films Roma and How To Stop A Recurring Dream, and in campaigns for Chanel, Nike, and Louis Vuitton.

Ibeyi have just released their latest single, Made of Gold feat. Pa Salieu.

Mike Smith, global president of Downtown Music Services, said: “Ibeyi are a wholly unique band.  Lisa-Kaindé and Naomi created this amazing music bound up in stunning harmonies fusing Spanish, Cuban and English together with a fearless political stance. This fractured world has never needed to hear their blend of spirituality and righteousness more. It is a joy to work with them and Richard Russell and the team at XL to bring their music to a broader audience.”