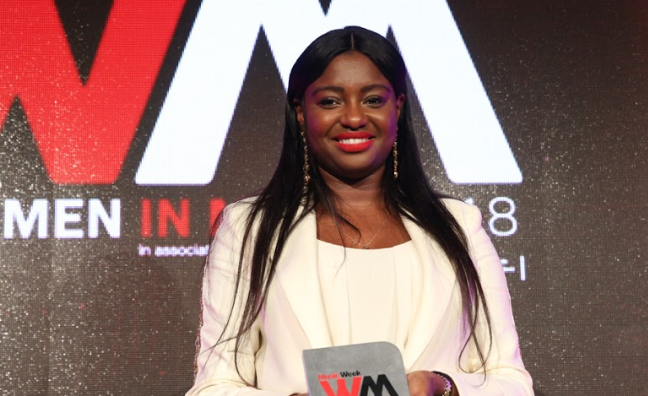 Shortly after leaving the Music Week Women In Music Awards 2018, where she accepted the inaugural Music Creative gong, Janée Bennett was off to the airport to fly to Thailand for a songwriting camp organised by Sigala.

As a small window into the life of the star songwriter known as Jin Jin, this shows something of the intercontinental life of the modern hitmaker. Mostly known for her work with her best friend and creative partner, Music Week cover star Jess Glynne (including the million-selling Hold My Hand), the Manchester-born songwriter has also worked with Raye, Jonas Blue and Jax Jones, for whom You Don’t Know Me has also topped the million mark.

But Jin Jin is far from a big shot, as her Women In Music acceptance speech proved. In the tribute video that preceded it, there was a starring role for her mum Janet and touching words from Atlantic’s co-heads of A&R Briony Turner and Alec Boateng and more. And all that without mention of Glynne’s heartfelt introduction. By the end, Jin Jin and Glynne were tearfully hugging it out.

Jin Jin’s story is one of hard work, perseverance and the steadfast pursuit of a dream. Subscribers can read her Music Week profile online here, and below we present her Women In Music acceptance speech in full…

“I’m incredibly overwhelmed. Thank you to Music Week for having me, I came here a couple of years ago and it’s so beautiful to be in a room filled with so many inspiring people. I’ve been so lucky to have been led by an amazing woman in my mum Janet who you saw in the video. Thank you to everyone – record labels, publishers, artists and everybody who’s taken meetings with me and listened to my songs, good and bad and given me great feedback.

“I’d like to thank my family, my stepfather Mark and my boyfriend Josh, you’re really encouraging on days when I don’t even believe in myself. Simon Aldridge and Peter McCamley for putting me in my first sessions and being really kind.

“I’m from Manchester and when I first came to London, people like DJ Target and Diane Reed who took me under their wing and treated me like a little sister when I was new to the big city. Thank you to all the A&Rs, Briony Turner, Twin B, Max Lousada. A massive thank you to my team at Universal, they’ve been super supportive. A massive thank you to Mark Gayle. I must call him about two or three times a day with crazy ideas and suggestions and he’s always encouraging. He calms me down when I feel insecure.

“Thank you to all the co-writers, producers and artists. Thank you to my good friend Jess Glynne, Raye, Jax Jones, Sigala, Fraser T Smith… To be quite honest songwriting has really helped me get through some of the hardest times of my life and I am really grateful that I get to do what I love every day. Thank you to everyone who’s given me a chance. I’m really honoured to have been invited to such and event and I’m proud to be a woman in this industry.”