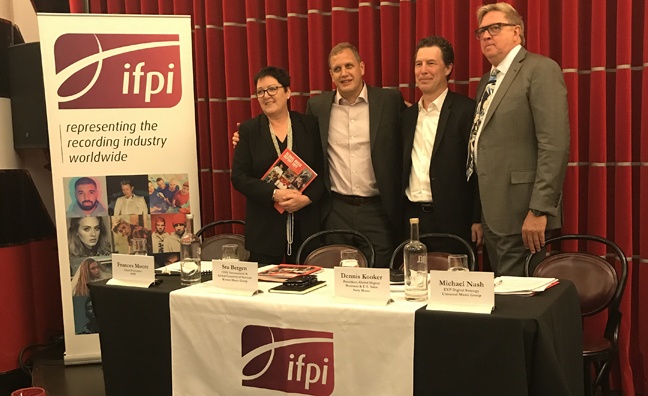 Sony Music exec Dennis Kooker has predicted 2016 will be seen as a “tipping point” for the industry after it emerged the global recorded music market grew 5.9% to £15.7 billion last year.

The new report revealed that there were 112 million users of paid music streaming subscriptions by the end of 2016, driving a year-on-year streaming revenue increase of 60.4%. Over the course of the year, digital income accounted for half the global recorded music industry’s annual revenue for the first time.

“It is paid subscription that is driving the return to growth of the business,” said Kooker. “This year we’ve reached 112m paid subscribers - a fantastic result.

“I think we will look back at 2016 as a tipping point for the industry, a point at which we moved from an early adopter stage to moving towards mass market.”

The streaming boom compensated for a 20.5% slump in downloads and a 7.6% decline in physical revenue – a higher rate than the previous year, which saw a decline of 3.9%. Streaming has also helped drive growth in emerging markets, with China (+20.3%), India (+26.2%) and Mexico (+23.6%) each experiencing significant revenue growth.

“As a headline stat, 60% streaming growth is deceptive, not least because that growth is being undermined by some services,” warned Warner’s Bergen. “They are exploiting ‘safe harbor’ laws, distorting competition, and undervaluing music.

“We’re only two years into our recovery, after a decade and a half of decline. We must remain alert, resourceful and ambitious. We’re no longer running up a down escalator, but that doesn't mean we can relax."

Universal’s Nash added: “We’ve accomplished quite a lot over the past year… But to declare mission accomplished is to fundamentally misunderstand the mission itself.

“We must constantly remind ourselves that the only reason we saw growth over the past two years, after some 15 years of substantial decline, is that music has been among the fastest adapting sectors in the digital world. We have fully embraced the reality that our success is based on the harmonious convergence of media and technology.”

Nash declared that there was too much focus on the competition around the first 100m paid streaming subscribers.

“We’re in the midst of a very significant market transformation,” he said. “I think that there is a great opportunity for growth so we’re less concerned right now by market consolidation happening because there’s competition around the 100m existing subscribers of services. We think that the adoption of new cloud-based formats is really just the beginning and that there is enormous opportunity.

“I wouldn’t think of it in terms of an end game and I would be hesitant to put a number on the table, but there are a number of factors that lead forecasters to suggest that there’s significant market growth potential. And again, when you look at a ceiling statistic around perhaps five billion smart phones active in the marketplace in a few years, there is potentially enormous growth.”