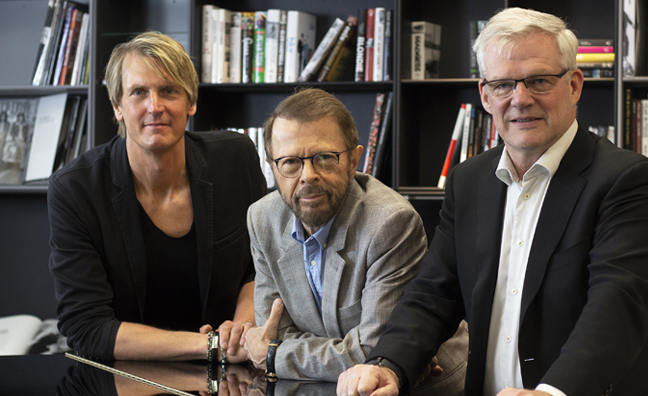 
Auddly co-founder Björn Ulvaeus has told Music Week that a new data partnership with PRS will help secure “quick and accurate payments” of royalties for members.

The ABBA songwriter “immediately had a vision of the potential” of the metadata tool when he partnered with CEO Niclas Molinder on the Swedish start-up five years ago.

The data hub, which also has the backing of Max Martin, enables creators to record song data from composition in order to secure transparent and correct credits.

“Being a songwriter myself, I know how it is when you’re in your creative bubble,” said Ulvaeus. “Splits are the last thing you think about. You come back to that afterwards and then tend to have different views on who did what - that is especially the case now when there are sometimes 10 or 15 writers on a song. So I could see how important it is to get that vital data at the moment of creation.”

“I see tracks that can have 10 writers and six publishers,” Paul Dilorito, PRS For Music director of innovation and partnerships, told Music Week. “It’s very difficult to manage metadata in a transparent and consolidated way when you’re trying to do that using email.

“To have a tool that is providing a standard way for creatives to communicate with each other is really valuable for the industry. Our ambition is for it to be as easy as any other app you use on your smartphone.”

Auddly will be made available free to PRS members from next year. The enhanced digital tool will combine industry identifiers for sound recordings and compositions at a time when music data is increasing – PRS processed 6.6 trillion uses last year.

“The more that writers and owners of copyright are engaged in the workflow, and the faster they complete the data elements and resolve any conflicts around ownership, shares and metadata, it will absolutely unlock more revenues and have revenues flowing more accurately,” said Dilorito.

He said the songwriting community would benefit from “more creativity” and closer working relationships, while the richer metadata would finesse music discovery.

“We hope that by sharing this data more widely with digital platforms, it will enable a whole new experience for consumers to discover music - and hence they will consume more music,” said Dilorito.

Ulvaeus added that there will be “less conflict because everything is solved during the creative process”.

“There are so many conflicts, with songwriters not being paid and being paid later [than they should be],” he said. “Quick, accurate payments is what Auddly can do.”

Robert Ashcroft, CEO of PRS For Music, said: “Björn Ulvaeus is one of the industry’s leading visionaries. With today’s trillions of individual streams on the internet, early and authoritative song registration are vital if songwriters and composers are to be properly paid for their creative works.”