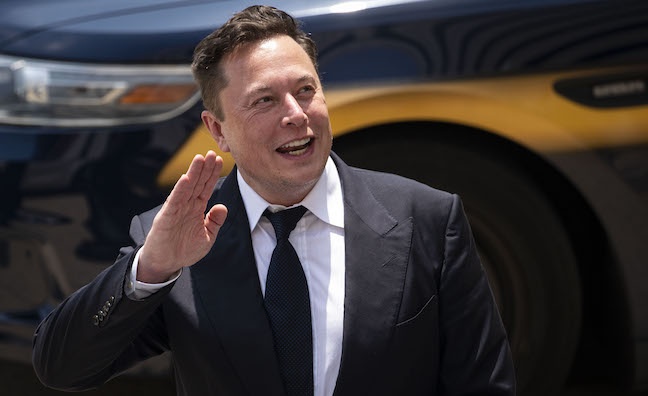 In its latest results for Q1, Twitter has made a confident forecast on earnings and it’s adding users at a strong rate with 229 million daily active users.

But despite quarterly revenue increasing by 16% year-on-year to $1.2 billion, the social media giant is still a hold-out when it comes to licensing music and paying creators, songwriters and rights-holders.

Now with Elon Musk set to take control of the company in a $44 billion deal, the music industry is calling for Twitter to become fully licensed to ensure there’s a fair deal for rights-holders from the boom in user-generated content.

It follows a wave of deals in recent years across platforms including TikTok, Triller, Peloton and Roblox, as well as comprehensive licensing agreements with social media giants such as Facebook and Instagram.

But Twitter has always been resistant to a deal, despite continuing efforts from organisations such as PRS For Music in the UK and its multi-territory licensing joint venture ICE. A licence with ICE would cover 330,000 songwriters and composers.

With the Elon Musk Twitter takeover on the horizon, there are now renewed calls for a level playing field for licensing across social media.

Andrea Czapary Martin, CEO, PRS for Music, told Music Week: “There has been very little positive engagement from Twitter despite work to license their service. They are one of the last current major social media platforms to be unlicensed and not to pay members for the use of their works. We must break the cycle of the ‘use first, pay later’ mindset, which has for too long been the characteristic of online platforms.

“The challenges for music creators in the streaming era have been well evidenced, and solutions can only be found when platforms such as Twitter take responsibility for the music they share to millions of people around the world.”

A Twitter spokesperson told Music Week: “We’re always looking at ways in which we can support our creator community.”

Last August, Twitter came under fire from US politicians over copyright infringement. A bipartisan group of members of the House of Representatives sent a letter to then Twitter CEO Jack Dorsey, calling on the social network to deal with “the ongoing problem of copyright infringement on Twitter and the platform’s apparent refusal to address it.”

“Creative content drives engagement on Twitter, yet unlike numerous other platforms, Twitter has not acquired licences necessary to ensure that all creators are properly compensated for use of their works,” they wrote in the letter. “Given the pervasiveness of this issue, we would like to have a better understanding of how Twitter intends to effectively address these concerns.”

With the growing use of video on Twitter - formerly a text-based platform - the issue is even more pressing as music increasingly features in user-generated content.

In December 2020, RIAA chairman and CEO Mitch Glazier testified before a Senate Subcommittee in the US that rights-holders had sent Twitter notifications regarding more than three million infringements of over 20,000 recordings during a two-year period.

Platforms such as YouTube and Facebook employ their Content ID and Rights Manager systems to enable labels and publishers to protect their works. But rights-holders have to spend more time and resources policing Twitter and requesting takedowns to prevent infringement.

Tom Gray, chair of The Ivors Academy, told Music Week: “It is frankly exhausting that tech companies still suffer from the delusion that they do not need to hold music licences to publish music. It is so obvious and fundamental that many of us merely regard them with bewilderment.

“When our music is synchronised there, we should clearly be paid. It is unreasonable to enjoy the benefit of our work without recompensing it. This isn’t the dawn of the internet, we are surrounded by precedents and a legal framework which dictate this necessity.”

In the latest edition of Music Week, Utopia Music COO Roberto Neri called for a cross-industry effort to ensure that unlicensed companies using music on their platforms to finally pay their way.

“There are some big companies that are currently unlicensed,” he said. “We would like the industry to come together to ensure that music and its true value are being completely realised. [Twitter] is certainly one company that I would like to see licensed.”