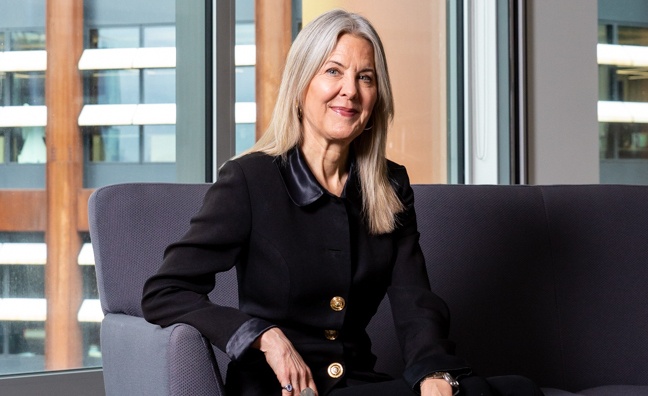 PRS For Music has revealed double-digit growth in total collections during 2021 as a result of soaring digital revenues.

Despite the continuing impact of the pandemic and the uncertainty around global collections, PRS delivered significant growth last year.

The organisation that represents the rights of over 160,000 songwriters, composers and music publishers, delivered a 22.4% increase in overall revenues to £777.1 million on a constant currency basis.

“It just shows how the music industry is resilient and has been resilient over the two years, because even last year we had a record distribution,” PRS For Music CEO Andrea Czapary Martin told Music Week. “It shows the power of how music connects and engages people.”

“Online really compensated for the downfall in international and in live,” said Martin. “Our investment in ICE is really starting to kick in.”

The year’s highlight was a 45.6% year-on-year increase on a constant currency basis in royalties collected from music played online to £267.8m. It represents a more than 50% growth since 2019.

PRS members featured on many of the most streamed hits of 2021, including Bad Habits by Ed Sheeran and Levitating by Dua Lipa. Adele’s 30 album was released late in 2021, but Martin still identified the superstar as part of the success story for the collection society last year, along with rap stars Dave and Stormzy.

The popularity of PRS members’ music throughout 2021 drove a significant increase in revenues from Spotify, YouTube, and Apple Music. Music streaming accounted for the largest proportion of online revenue in 2021, contributing £225.5m to the overall online income, up 42.5% since 2020, and 45.5% since 2019.

Martin stressed that the growth was down to important new deals rather than any one-off factors.

“It’s not backdated deals on the online, it is new deals like Disney+ which has had great success,” she said. “We did a great negotiation on Disney+, as well as Apple TV+, Netflix. Of course, the increase from video-on-demand and from streaming contributed to that increase, as well as better processing on the part of ICE.  We disputed everything we could, the team was very focused on distributions.”

Revenues from video-on-demand platforms have almost doubled during the last two years, increasing by 50.7% (£11.6m) since 2020, and 94.9% since 2019. It is being driven by increasing numbers of subscribers, increased pricing from existing services, and new consumer services and products entering the market.

“A lot of the growth is coming from video streaming,” said Martin.

In 2021, PRS for Music secured new licences, concluding a record number of major licences throughout the year. It included the new licence with Disney+, and renewed agreements with Apple TV and Netflix.

The deals ensured the flow of royalties for composers including Emmy-nominated Natalie Holt (Loki, Disney+), Marcus Mumford and Tom Howe (Ted Lasso, Apple TV+), and classical reworkings of some of PRS for Music’s most popular catalogue, such as Strange by Oscar-nominated Celeste (co-written with Jamie Hartman), which featured in Netflix’s Bridgerton.

It shows the power of how music connects and engages people

Online income is now ahead of international for PRS.

“Of course, international was impacted because of the pandemic, but it just shows you how online has increased incredibly,” said Martin. “And not just in revenue, but in distributions. TikTok is part of that but also the new licences.”

International royalty income outperformed predictions, yet still fell by 2.5% year-on-year to £242.4m. However, on a constant currency basis revenues actually increased by 2.1% compared to 2020. Lockdown restrictions varied in different territories.

PRS for Music continues to build relationships in emerging markets like the Middle East and Africa, as well as renegotiating improved commercial terms for members in its international agreements, all of which are set to have a positive impact on royalty flow in the coming years.

PRS for Music secured new long-term music licensing agreements with Sky and the BBC in 2021.

Public performance revenue overall - including live music events, as well as music used in business premises, shops, cinemas, pubs, clubs, hotels, and restaurants - saw a 59.6% uplift year-on-year, to £137.6m, despite the UK being in lockdown for over five months. Total revenues were still down 38.1% compared to 2019.

But there is renewed optimism for the live sector in 2022, with 40 major tours featuring PRS members planned throughout the UK and beyond.

But the overall result in revenue terms means that PRS remains on course to achieve its ambition to be a £1 billion collection society by 2026.

“It’s a five-year aspiration,” Martin told Music Week. “I think it is possible with the different initiatives we’ll be doing. Our cost to income ratio being a bit below 10% will also contribute to that £1 billion [target].

“We are very innovative in our systems, and work very closely with our joint ventures to maximise the investments, especially in PPL PRS and in ICE.”

Subscribers can click here to read our interview with PRS For Music’s Michelle Escoffery.