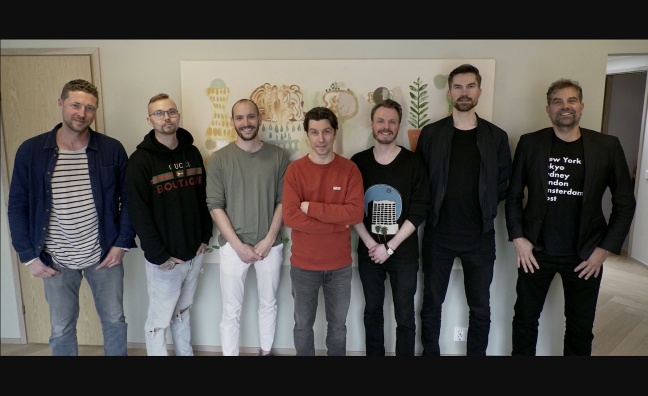 Nordic Music Partners has been launched as a “creator-driven” publisher by a group of successful songwriters, who have collaborated with acts including Justin Bieber, Tiesto, FloRida, Jason Derulo, Dua Lipa, Doja Cat, Kylie Minogue, and more.

The company was launched this spring by the team of hitmakers behind multi-platinum selling hits, who now aim to create a network linking up songwriters from the Nordic region to the rest of Europe and the United States.

Originating in Helsinki, Oslo, Amsterdam and Paris, the new publishing company has been established by co-founders Teemu Brunila and Jukka Immonen, who joined up with Rick Haayen (ex-Universal USA and Europe, V2 Benelux).

According to Haayen, "all parties have a deep connection with and presence in Los Angeles and the United States market, making NMP a unique bridge between continents thus being an ideal breeding ground for tomorrow’s global music repertoire”.

Nordic Music Partners co-founder Teemu Brunila is among the most successful songwriters from Finland. One of his latest compositions, Tiesto's Don't Be Shy, currently has 300 million streams on Spotify. Brunilla also co-wrote Jason Derulo's Take You Dancing with Yoshi Breen, who heads up the Amsterdam office with Haayen.

Based in LA, Andreas Schuller (aka Axident) heads up Nordic Music Partners Oslo. Axident is best known for co-writing and co-producing Hot 100 No.3 hit Wiggle for Jason Derulo and Snoop Dogg.

At Nordic Music Partners Paris, Pierre-Antoine Melki (aka Nius) has co-written numerous hits with songwriting partner SoFly for the likes of Justin Bieber, Sia, Doja Cat and FloRida. Melki is joined by Yoan ”Oddfellow” Chirescu in the French office. As a producer, songwriter and musician, Chirescu has worked with both French and international artists, such as Kid Ink, FloRida and Enrique Iglesias.

Nordic Music Partners is now set to open a branch in Berlin.

"All founders of Nordic Music Partners know the ins and outs of successful songwriting from experience,” said Andreas ”Axident” Schuller, songwriter, producer and co-founder at Nordic Music Partners Oslo. “This puts us in a way better position to develop and nurture talent than suits with an excel sheet.”

"Our NMP team is a unique group of people,” said Yoshi Breen, songwriter, producer and co-founder of Nordic Music Partners Amsterdam, “A mixture of world-renowned creatives and music business royalty. I feel truly blessed to be part of this very exciting and progressive journey.”

”We are confident that being creator-driven and having partners from four different countries - all with strong connections especially in Europe and in the US - makes us a unique player in the music publishing industry,” said Riku Salomaa, managing partner at Nordic Music Partners. “We believe that songwriters deserve the best possible creative mentoring and we build our operations around that philosophy."

”I’m really proud to be part of this new initiative that is Nordic Music Partners,” added Rick Haayen, co-founder Nordic Music Partners Amsterdam. “Throughout my career in music I’ve always encouraged innovation, breaking the mould and finding better ways to support the creative community in development and in business. NMP does all of this in a unique way. It’s a new concept for the publishing business on an international level, where the company is run, owned and operated by globally successful creatives in their own right.

“Furthermore, all parties have a deep connection with and presence in Los Angeles and the United States market, making NMP a unique bridge between continents thus being an ideal breeding ground for tomorrow’s global music repertoire.”