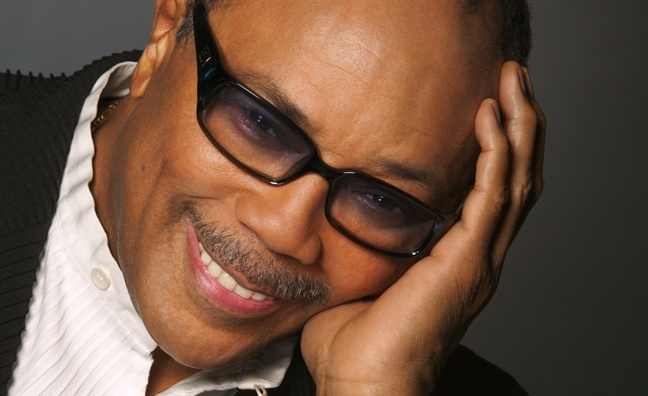 It’s a big day for Warner Chappell Music. Today (September 8) the music publisher has announced it has entered into a global publishing agreement with the legendary Quincy Jones.

An official press release states that the administration deal “covers Jones’ genre-crossing songwriting catalogue, as well as all current and future material. The pact, which encompasses over 2,000 compositions, also includes work by several songwriters under the umbrella of Jones’s company, including the Brothers Johnson, Siedah Garrett, and others.”

Jones has earned a record 80 Grammy Award nominations, including 28 wins.

Speaking about the deal in a joint statement, Warner Chappell Music co-chair & CEO Guy Moot and co-chair & COO Carianne Marshall said: “A creative genius and a cultural icon, there is no figure in modern music who has accomplished so much across so many generations; who has broken so many musical and social barriers; and whose impact has been so wide-ranging as that of Quincy Jones. As a composer, Quincy has embraced and blended nearly every genre to create a unique, incredibly rich and diverse body of work. Whether it’s driving people onto the dancefloor or propelling the narrative of a film, Quincy’s music transcends race, style, and age. We are thrilled that he has chosen to return to Warner Chappell, and it’s an honor to represent the work of a true master.”

Nancie Stern, vice president of Quincy Jones Music Publishing, added: “We are so excited to be working with Warner Chappell again. They have an exceptional creative and administrative team, and I know we will have a long and successful relationship working together. Quincy started his journey in the publishing business with Warner Chappell and built our incredible catalogue during those crucial years, so it seems right that we have returned to where it all began.”