"We fight for our songwriters": Inside the world of Sony/ATV with Martin Bandier, Guy Moot and Brian Monaco 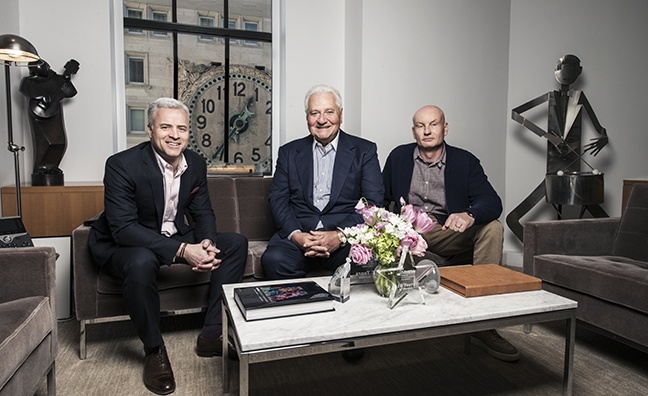 In the new issue of Music Week, Sony/ATV’s top team – Brian Monaco, Guy Moot and the legendary Martin Bandier – take us inside the inner-workings of a publishing giant.

In the interview, the trio explain that while Sony/ATV led the 2017 UK market shares with 33.15% (almost double the share of its nearest competitor) they are still striving for more. In particular, they stress that the goal is to be perceived not so much just as a major publisher, but more as a company that can make a profound difference at the songwriting stage.

Looking back on 2017, Sony/ATV’s chairman and Ceo Martin Bandier told Music Week it was “more than a good year” for the company, while also citing the tremendous opportunity presented by streaming. He went on to outline his feelings on the streaming sector as a whole.

“We’ll see what happens when Spotify goes public,” said Bandier. “I’d feel better if we had some equity in it! We do what we do and we fight for our songwriters to get paid. Songs are the secret sauce that makes everything work. You can’t have a hit without the right melody and lyrics, it just doesn’t work and you become a spoken word or something. No one gets that credit, but Spotify just announced that they’re going to provide songwriter and producer credits.

“It’s incredible to think that we’ve just had a new [streaming] rate set by the CRB, but five years ago we stuck with the same rate,” added Bandier. “There was no hearing, we all shook hands and said, ‘Let’s keep the same rate’, because there was no such thing [as a streaming business]. And now, all of a sudden, Spotify announced they have 70m subscribers. The business is growing beyond belief and streaming is clearly leading the charge.”

The modern A&R exec has to be travelling, music can be discovered within a second, wherever it’s from and whatever the circumstances it’s posted under

The trio also addressed the evolving nature of the business of songwriting and publishing, particularly from a world-wide perspective.

“It’s completely global now,” said Sony/ATV UK MD and president Guy Moot. “We’ve got artists signed from Nigeria, East London then you’re in LA, Toronto is a hotspot. I’m planning a trip to China to really look at the possibilities, same with Japan. The world map is changing. The modern A&R exec has to be travelling, music can be discovered within a second, wherever it’s from and whatever the circumstances it’s posted under. We like to reflect that. And it’s about coordinating a team of A&R people to support our writers. It’s no longer about a group of individuals with egos, it’s about working as a team across territories. If a writer from LA goes to Stockholm they have the best possible A&R and creative back-up, we can put together an incredible schedule and vice versa.”

“We’re a global team,” added Sony/ATV global chief marketing officer Brian Monaco. “We talk to Guy on a weekly basis, he’s constantly having artists come and meet with us before he even signs them, because he wants to make sure we’re giving the artist exactly what we say we’re going to give. That’s why we’ve been very successful; we don’t promise things we can’t deliver. That happens a lot with other publishers in the business, there’s a big smoke show of what’s going to happen.”