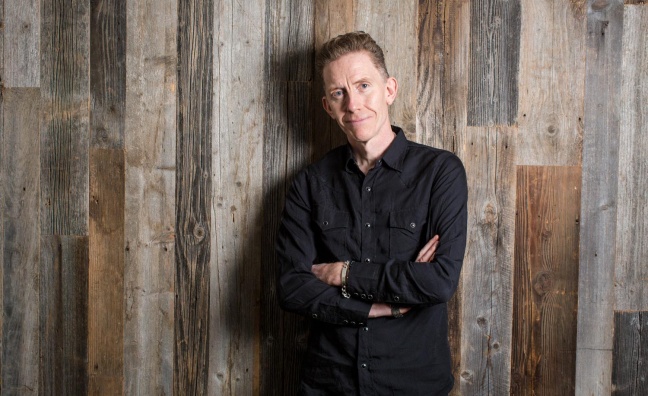 Since Mike Smith took over as managing director of Warner/Chappell in late 2016, he’s been busy signing songwriters to the publisher. As well as swooping for Liam Gallagher, Katy B and Andy Partridge, this week’s issue of Music Week reveals that Smith has inked a global deal with Siobhan Fahey for her catalogue (co-writes for Bananarama and Shakespears Sister), future compositions and songs written for other artists. As Warner/Chappell UK builds its roster of songwriters and expands its collection of catalogues, Smith told Music Week about his plans…

Warner/Chappell has just reported global revenue growth – would you say the UK was part of that success?

I don’t think you can ignore the success that we’ve had this year. If there’s one defining trend or scene that’s blowing up in the UK, it’s been with urban music, with hip-hop. I feel very proud of the fact that we’re publishing Stormzy and Skepta, J Hus and Dave. We’ve led the way in that area of music. Combine that with the success we’ve had with artists as diverse as Rag’N’Bone Man, who’s obviously had one of the most successful records this year – the biggest UK breakthrough – and with the classic artists we’ve worked with like Gorillaz, Elbow, Goldfrapp, London Grammar. Michael Kiwanuka has continued to have success this year, we’ve got Liam Gallagher releasing an album in a couple of months’ time. MNEK is shaping up to be one of the most important British songwriters to have emerged in the last 10 years. I think we’ve had a very strong year.

How did you end up signing Siobhan Fahey – had you worked with her before?

I was working at EMI Publishing when Shakespears Sister were signed there, but I didn’t actually get to work with her then. I’ve been an enormous fan of Siobhan from the early days of Bananarama, from the very first single, which Paul Cook from the Sex Pistols produced. So I always loved them as a punk-rock girl group. I’d always been fascinated by them, always loved the way that they grew and developed and continually reinvented themselves. I became aware that the publishing might be available. She’s always struck me as an incredibly inventive songwriter. I feel confident that she’s got a lot to offer still as a songwriter, and I think she is still an inspiration to younger artists.

Do you think her catalogue has been under-used in recent year?

Yes, I think her Shakespears Sister catalogue is ripe for reinventing. Stay was an enormous hit, I’ve always loved You’re History. Our sync team were so excited to have the opportunity to work on these songs – we think there’s a great deal of life left in them. To me, they’re timeless and I really believe you can do great things with them.

Well, the wonderful thing about publishing is that you earn from the touring side of the business. I think having the girls out there talking about the band, talking about the catalogue, will create a huge interest in the songs and bring around a whole new generation to fall in love with the songs. We’re doing a lot of work around them, working with our digital partners to get as much exposure on the catalogue as possible.

Is building up the Warner/Chappell catalogue part of your strategy?

Yeah, it has to be if we’re going to grow the business. It’s about acquiring songwriters and it’s about acquiring catalogues. It’s very competitive out there but I hope that we can offer something really strong to songwriters who are looking for their catalogues to be worked properly. Going back to the time when I was working at Columbia, we had an amazing roster of artists that were described as heritage artists: Bruce Springsteen, AC/DC, Barbra Streisand or Neil Diamond. My approach was always to try and work them as frontline artists and by doing that we had incredible success and an amazing run of platinum records. I think it’s a similar thing in publishing: the catalogues can often just be left on the shelf to earn money on their own. I think we need to work the catalogues every bit as aggressively as we would work out frontline artists.

How is it working with Liam Gallagher as a solo songwriter for the first time in his career?

Yeah, it’s fantastic. He’s written the majority of the material on his debut album, and I think the quality of the songwriting is fantastic. You know, his work ethic has been amazing, the amount of focus and drive that he’s brought to this record has been everything I could have hoped for. You get involved with somebody because you believe in them passionately, and it’s wonderful to see that belief repaid. He’s been incredible to work with and he’s hugely ambitious for himself and I think we’re going to have a great run with him over the next 18 months.

To read the full cover story, see this week’s edition of Music Week, or subscribers can click here. To subscribe and never miss a big music biz story, click here.