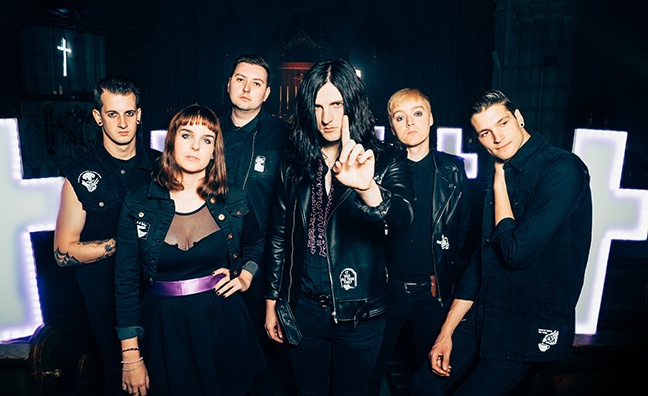 A 22-year-old singer from south-east London who immortalised Catford, where she lives, in the seismic, soulful, Stormzy-featuring My Hood back in May 2016.

Blk also tackled discrimination in the equally impactful Chill Out, which was filmed in Jamaica and features several Gully Queens, trans and gay young people who live in the network of sewers in the country’s capital Kingston.

Alicia Keys and Lauryn Hill are big names to bandy around, but Blk is gunning for the head and the heart in much the same way. This is R&B to make you feel something.

The indie label community has been fruitlessly chasing this lot for a while now. The Philadelphians blend good time punk‘n’roll with intelligent, political lyrics and uncompromising attitude, plus, singer Tina Halladay (above, centre) is a force of nature.

London independent Static Shock Records is releasing a 12” comprising their three EPs to date in March, with a debut album to follow soon.

But will this be the year Sheer Mag sign somewhere bigger?

This four-piece from south London could have been signed by Rough Trade at any point during the label’s history.

The west London institution won the race for Goat Girl’s signatures last September and the punkish jangle of debut single Country Sleaze – plus a hectic touring schedule – has quickly made it seem as if they’ve been around for ages.

The band are not yet out of the scuzzy (and brilliant) circuit of venues they grew up in, but a move up a gear is surely imminent.

Last November, AJ Tracey hinted to Music Week that he might be cooking up a collaboration with Drake. In the same interview, he spoke of his desire to crack America and predicted grime’s wait for its own category on Apple Music will soon be over.

The west London rapper is clearly not short of confidence, and why should he be? Tracks like Buster Cannon and Pasta – from December’s Lil Tracey EP – are punchy, vivid and distinctly trap-flavoured, marking the 22-year-old MC apart from the capital’s grime crop.

Young, unattached to any major label and always seeking a fresh approach, Tracey bears comparison to Stormzy 12 months ago, which is no bad thing.

HMLTD (short for Happy Meal Ltd, as they were formerly known) sound just as erratic, outrageous and confusing as they look.

Released at the end of last year, their brilliantly named debut 7”, Stained/Is This What You Wanted?, capped months of industry hype and slavering.

There’s a special sense this band doesn’t fully know itself yet; expect their journey to self-discovery to be thrilling.

Over the past couple of years, Royal Blood and Bring Me The Horizon have helped re-energise British rock, but neither fill the gap Creeper look likely to.

With melody and accessibility to the forefront, the Southampton six-piece could be the closest this country has come to a modern rock phenomenon in the vein of My Chemical Romance.

That’s not to say they’re emo – far from it – more that they have a sound and aesthetic that’s both distinctly theirs and appealing to the masses.

They call themselves a cult, and by the time debut album Eternity, In Your Arms, drops in March, they may well be proved right.

Dave’s is no everyday trajectory. In September 2016, he appeared with collaborator AJ Tracey onstage at Bestival.

It was a first festival performance for the south London rapper, who used to be known as Santandave after a pun on high street bank Santander.

In October, Drake remixed his track Wanna Know, then, in December he made his live headline debut at Camden Assembly and a three-date UK tour scheduled for March sold out in an hour.


When Jorja Smith uploaded debut single Blue Lights to SoundCloud a year ago, she was still pouring coffees in Starbucks.

Now, the 19-year-old from Walsall is increasingly known for sleepy, soulful pop songs like Carry Me Home and Something In The Way and has been endorsed by Drake, Stormzy and Skrillex.

The singer’s story is as heartwarming and organic as her songs, which slink like Prince and D’Angelo. Her voice, meanwhile, stands up to comparisons with Amy Winehouse.

Rex Orange County is a supremely chilled teenager who mashes hip-hop and indie rock into drifting, smudged pop. Candid, easily relatable and filled with spirit, his November single Uno was reminiscent of both Jamie T and King Krule, who are also managed by September.

He’s reportedly working with Two Inch Punch and Badbadnotgood and already has a fan in Odd Future rapper Tyler, The Creator. T

he Surrey singer has live shows on the horizon for 2017 too, so while you wait why not dig out his 11-track debut release, bcos u will never b free, on Bandcamp.

You’ll likely know the story by now. Busker Joe Fox met A$AP Rocky and his producer Hector Delgado while selling CDs at 4am on a Soho street.

They asked him to play a song on the acoustic guitar in his hand; he did so and was immediately invited to collaborate on Rocky’s 2015 album At. Long. Last. A$AP.

Now, he’s signed to Island and, following October’s Acoustic Alley Sessions debut EP and an extensive UK tour, is set to properly launch his solo career in 2017. It’s probably safe to say his busking days are over

And now for seven more artists set to light up the year...

“I’m from where the fuckin’ devil is”, rapped Nadia Rose, Croydon local and cousin of Stormzy on last year’s totemic ode to friendship, Skwod. You’ll wanna be in her gang.

Endorsed by Pete Tong, this London house trio have already collaborated with Calvin Harris, tasting mainstream success as How Deep Is Your Love hit No.2 last summer. Could they go as big as Disclosure this year?

Freaky LA trio who co-opt Disney’s font in their logo, make twisted electronic pop and released their debut EP on a USB stick shoved inside a candle shaped like a rabbit.

This Bristol singer fills the dark spaces in her heavy, emotional songs with hushed vocals and eerie production. Fans of The xx take note.

The 18-year-old, Croydon-born BRIT school graduate has been bubbling under the surface for a few years now and, after collaborations with Stormzy and Charli XCX, is primed to break through this year.