On The Radar: The Lathums 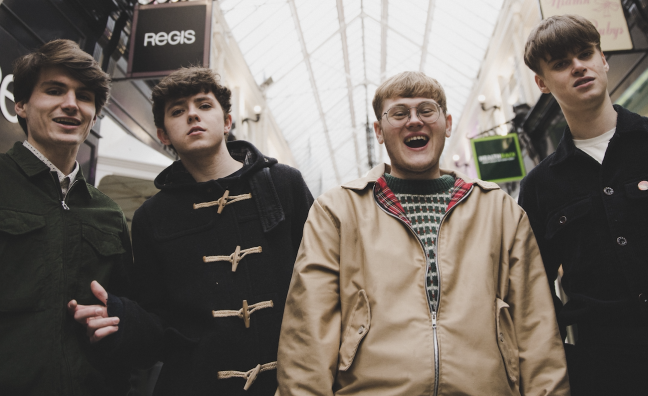 The Lathums might have began life as an assignment at Pemberton’s The Music Projects College in 2018, but now the top marks are coming from fans. After releasing two EPs in 2019, they sold out a headline tour in a day, bagged support slots with the likes of Blossoms, DMA’s and Paul Weller and then signed a deal with Island. All aged just 20, singer Alex Moore, guitarist Scott Concepcion, bassist Johnny Cunliffe and drummer Ryan Durrans must be responsible for one of the few ‘school’ projects to end up in the Top 20, which is where The Memories We Make – a collation of their first two EPs – landed earlier this month, reaching No.14 in the UK album charts.

“It’s quite weird really, I’m not up to scratch with charts but obviously it’s a big thing isn’t it?” asks Moore down the line from Liverpool’s Parr Street Studios where he’s working on the band’s debut album with producers Chris Taylor and James Skelly (the latter also frontman of The Coral). Moore says the Wigan-born band have managed to take their rapid success in their stride, insisting the four-piece are “just normal people doing what we love”. Yet, with offers for collaborations already piling up, Moore admits he’s eager for more. “I feel quite excited by it, the fact that we can impact so many different people from different places, it’s quite a humbling feeling,” he notes.

You might be speculating how a young band has torn through the cornerstones of indie success so soon, and while Moore argues it’s just down to “making a big racket”, it seems The Charlatans’ Tim Burgess was something of a catalyst. After hearing The Lathums’ sprawling track The Great Escape, Burgess shared their video to his legion of Twitter followers before asking if they could fill a spot on his stage at 2019’s Kendal Calling.

They’ve since garnered over four million Spotify streams for their anthemic choruses and guitar-laden belters, but it’s the band’s vintage qualities that truly have hooked fans. The LP edition of The Memories We Make reached No.2 in the vinyl chart, accounting for the majority of their album sales, while the video for their first single with Island, All My Life, was filmed entirely on a Super 8 camera. “I’ve always liked old fashioned things,” explains Moore, who cites Elvis Presley and Patsy Cline among his influences. “The fashion sense and the music, music was a lot better back in the day.”

The singer grew up surrounded by music, recalling vivid memories of his mother singing Motown around the house, which encouraged him to sing when he was “dead young”. The Lathums’ collective influence though is that fab perennial The Beatles. “I got into them from Scott. He has these musical fads where he just becomes completely obsessed by someone,” explains Moore. “I already knew The Beatles obviously, but he broadened my mind to them and I delved in a bit more.”?

For the singer, his band’s main purpose now is to spread positivity in the world through his lyrics, and The Beatles are the reason behind that goal. “They made really positive differences in society, they gave people a different perception of things, and they united people who would’ve otherwise never even spoken to each other. I want to make positive differences too,” he declares. While he doesn’t see himself as a political artist, Moore has sung about everything from the French Revolution to Generation Z and is sure the band’s new songs will “ruffle a few feathers”.

If all this can happen in two short years, The Lathums are determined not to let up in 2021 when they’ll have a full debut album and, hopefully, gigs again. “I want to be one step closer to taking over the world,” Moore smiles of their future plans. “I just want to spread our message as far as humanly possible, that’s my goal.” The Lathums really are top of their class.