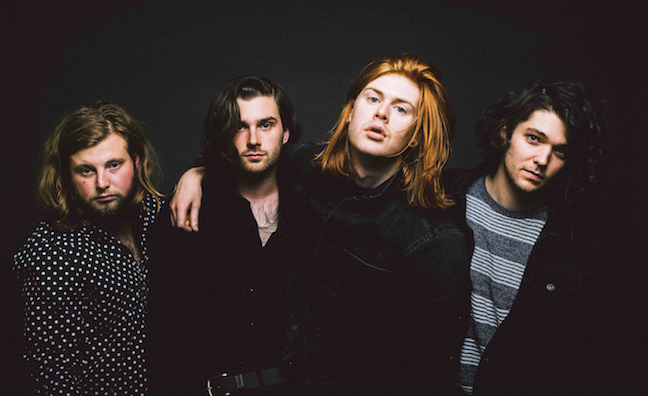 According to The Amazons vocalist Matt Thompson, guitar bands could learn a thing or two from grime acts when it comes to getting ahead in a crowded emerging talent market.

Speaking to Music Week after the Reading band’s set at BBC Radio 1’s Future Festival, Thompson said: “Guitar bands haven’t been as savvy as grime or hip-hop artists. It seems like grime has been so self-sufficient and Chance The Rapper didn't release on physical. I think in the future guitar bands need to learn from that."

The singer put the divide down in part to the genre’s differing relationships to major labels. “With grime, major labels just aren't picking them up so they’ve got to do something about it,” he said. “Thankfully for us, labels are still interested in guitar bands, maybe not so much as they were before but they still are. Whereas if you’re a grime artist and all you've got is your broadband connection, you can do so much damage with that. I think that’s why it’s so exciting.”

Thompson, joined on the Future Festival line-up by Nadia Rose and Dave, praised radio’s embracing of grime. “Radio are doing a really good job of catching up on what the internet has been doing for a couple of years now, supporting more grime and urban artists and that’s certainly a good thing. I think those genres are today’s punk and that should be celebrated”.

The Amazons are signed to Fiction and are due to release their debut album this year. After inclusion on the BBC’s Sound of 2017 longlist and MTV’s Brand New 2017 list, Thompson said the band have felt the benefits already, though “the tipping point” is yet to come.

“It’s lots of little things,” he said. “It’s selling out shows and doing interviews, that’s where you see it most. On social media as well, if the BBC or MTV tweet about you that’s a huge audience that they are talking to. So we’ve seen the socials increase.”

Even so, Thompson revealed he’s “waiting for bands to get popular again”. He believes “you do your business in the album chart” and, while he stressed he doesn’t want the charts to be filled entirely with guitar bands, said “you want a bit of variety”.

With that in mind, perhaps Radio 1 should take some credit for filling their emerging talent showcase – which in previous years has seen Disclosure, Stormzy and The 1975 perform – with such a varied array.

Hosted by Huw Stephens and MistaJam across two studios in Maida Vale and broadcast live on Radio 1, the night saw performances from Alma, They, Jorja Smith, Declan McKenna and The Big Moon, as well as The Amazons, Dave and Rose.

The Amazons were up first, their pummeling choruses and Black Sabbath-style riffing followed by Finnish singer Alma, whose band provided crisp electronic accompaniment to moody R&B tracks like Karma. Then came 18-year-old Declan McKenna, complete with floppy fringe, glittery cheeks and in a kind of all-in-one safari jumpsuit. Thankfully, he had the energy to match and, although a little rough round the edges at times, his boisterous indie-pop proved an easy win.

Following her cousin Stormzy to this event, Croydon rapper Nadia Rose brought confidence, charisma and flawless delivery. Fittingly, her four song blast of attitude ended with a mic drop. They, a hip-hop duo from Los Angeles, spliced trap and 90s-flecked R&B, while The Big Moon went for guitar-driven bangers from Weezer’s school of indie brilliance.

It was left to Jorja Smith and Dave to finish up. Simply, Smith captivated the audience, which can be tough in these studio, live-on-air events. She’s been heavily tipped and here, you could see why. Smith’s vocals were at their most haunting during closer Blue Lights, a dark, synth-laden ballad that references Dizzee Rascal’s Sirens. Its somber mood lead right into the final artist of the night, Dave.

The Streatham rapper seemed nervous at first, appearing after five minutes of hype from MistaJam and DJ Semtex. But his jittery chat was quickly eclipsed by Six Paths and the brilliant Panic Attack, which he delivered solo at the piano.

After so much noise about these acts over recent weeks, it felt significant to see them all under one roof. And in the week Radio 1 launched its Brit List, it feels like the station is on something of a roll when it comes to new music.