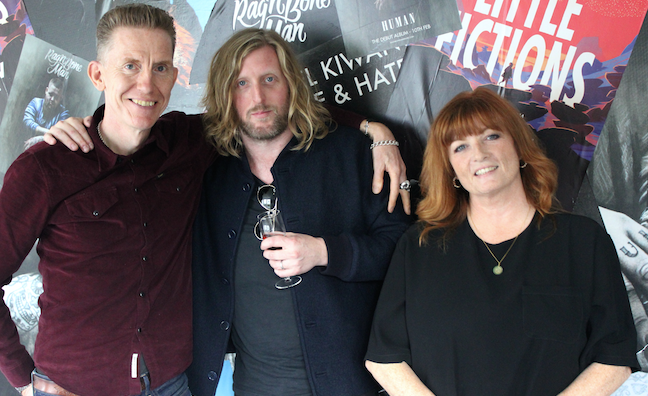 Burrows, who rose to fame as Razorlight’s drummer in the 2000s, is currently working on his fifth solo album and is writing for Tom Odell’s upcoming third record. Pictured above are (left-right): Mike Smith (MD, Warner/Chappell Music UK), Andy Burrows and Terri Hall (Hall Music Management).

Burrows said:  “I’m so pleased to be working with Mike [Smith] and the team at Warner/Chappell. They have a great reputation for helping nurture songwriters’ careers. I’ve got a lot of projects on the go at the moment, and Warner/Chappell is well placed to help support me.”

Mike Smith, managing director, WCM UK, added: “Andy is amongst the most charming, talented and well connected songwriters out there. From the classic songs he wrote in Razorlight, to the tunes he has written with Tom Odell, to his work in film and television, not to mention his diverse solo career, he remains one of the hardest working and inventive writers in the UK.”

After leaving Razorlight, for whom he co-wrote UK chart-topper America (592,765 sales to date, according to the Official Charts Company), Burrows has worked on a wide range of projects, including co-writing the BAFTA-nominated soundtrack for The Snowman and The Snowdog and co-producing the soundtrack for David Brent: Life on The Road, in which he also starred. Burrows also played drums for We Are Scientists and contributed writing to their albums Barbara (2010) and TV En Français.

Burrows is a long-time collaborator with fellow Warner/Chappell songwriter Tom Odell, and has four cuts on Odell’s upcoming album, which is expected next summer.

Matt Haig, the best-selling author, is contributing lyrics loosely based on his books How To Stop Time and Reasons To Stay Alive to Burrows’ new LP. Burrows is producing the album with Tim Baxter, who previously worked with him on Company.