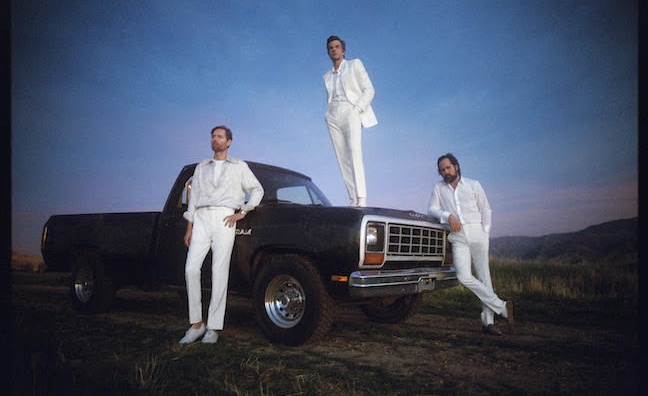 The EMI band, who star on the cover of this week's issue, are heading for a sixth No.1 with the record, according the Official Charts Company midweeks.

The LP was originally due to be dropped in late May but was delayed by three months due to the pandemic.

"In a lot of respects it's no different, we're trying to write songs that move us and that hopefully resonate with people, said Flowers, regarding the unique circumstances. “People need music now more than ever. Music has always been a place that I go to for comfort or escape, or to feel like I’m not alone, and I think those attributes of music are still alive and kicking and people need them now.”

The 2019 Glastonbury headliners had been due to play their first full UK stadium tour earlier this year, before the live music shutdown caused its postponement to 2021, and Flowers agreed the new record lent itself to large venues.

“We’ve always written a certain type of song that resonates with a lot of people,” said the frontman, speaking in this week's magazine. “We’ve never been shy about our admiration for the Rolling Stones, U2 and these bands that do that well and so I think it’s just part of our DNA. It’s definitely there and it’s something that you think about.”

The group's manager Robert Reynolds said his commercial expectations had been impacted by the coronavirus crisis.

"Before Covid-19, I had very high expectations," he said. "Imploding The Mirage is packed with songs that fans are going to flip over.

"Now that we won't have touring to support the new songs, I'm not sure what to expect. Bands that aren't using the biggest pop writers to dominate top 40 radio rely on live performances to expose fans to their music. All of The Killers' hits - and even non-hits that became fan favorites, like All These Things I've Done - became such as a result of live performances. I can't wait for us to get back on the road to do this album justice."

The Killers camp also addressed sexual misconduct accusations made in a blog by audio technician Chez Cherrie, dating back the band's Day & Age tour. Cherrie, who worked on the tour for three weeks in 2009, described a misogynistic backstage culture. Most seriously, she alleged hearing crew members boast of sexually assaulting an intoxicated woman in a dressing room at a Milwaukee venue.

A subsequent internal investigation deduced the claims were “an attempt at a joke or a ‘hazing’” by a front of house (FOH) engineer after interviewing crew and tracing the alleged victim, who confirmed “she did not experience, witness or hear about a sexual assault”.

"Thank God, it was proven to be a false alarm," said Flowers. "I want our fans to know that we would never turn a blind eye to an assault. We respect women and we want everybody to know that.”

The Killers have directed their team to establish an off-site independent HR contact for future tours.

"Touring and the music industry as a whole was really different 10 to 15 years ago and we hope we can be part of the change to make it more welcoming to everyone," said Reynolds. "We all need to be vigilant that no one is ever made uncomfortable. Unlike other large companies, touring bands don't have HR departments. For that reason, we decided to retain a third party HR company going forward. I'd suggest every band do this so that all crew members feel like they have a reliable third party to voice and investigate concerns."

Subscibers can read the full The Killers cover feature here.