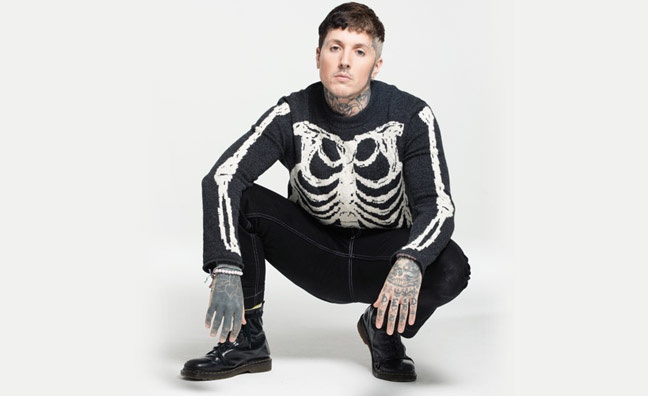 How do you crack rock's streaming problem? Bring Me The Horizon frontman Oli Sykes knows.

It’s rock week in Music Week, with our annual rock issue hitting shelves and starting conversations across the industry.

And new Music Week research shows hard rock and metal continues to under-perform the market on streaming, despite the best efforts of DSPs like Spotify. Classic rock tracks dominate the year’s biggest rock streaming songs so far, with one notable sensation.

Yep, you guessed it: Bring Me The Horizon. Their single Parasite Eve – taken from new EP Survival Horror, out now on RCA – is the sole 2020 release on the Top 100 with 6.8 million streams.

That success isn’t a one-off, either – the Raw Power-managed band have long led the way for heavy music in the digital age and – as this week’s Music Week cover story reveals – they are now modifying their approach to maximise their appeal on the format. So there will be no new album: just a series EPs, initially digital only, with physical editions and a box set compilation to follow. It’s working too, with Survival Horror heading for a Top 10 placing on the albums chart on Friday.

“It’s all to do with the market, the way people consume music now,” frontman Oli Sykes told Music Week of the band’s new approach. “Not only was it becoming so out of date for bands to release an album, but the actual creation and artistry was starting to get abused. You could feel it – people started tailoring music towards streaming platforms, making these albums that had 16, 17, 18 tracks, all with one mood that didn’t go up or down too much.

“And, at the same time, people consume music so fast,” he added. “We spent a year on our last album and we were proud of it – but there were some days when we were forcing creativity because we had to have x amount of tracks. I wanted to get out of that. We can release music quicker and we’re not as precious about it.”

Most rock artists can’t even stand up to Drake’s fourth week, let alone his first

Oli Sykes, Bring Me The Horizon

Last time Bring Me were on the cover of Music Week, they famously claimed that most rock songs were not strong enough to compete with the cream of pop and hip-hop on DSPs. And Sykes says rock still has a problem…

“Go back 20 years and contemporary rock songs were pop,” he said. “It was like hip-hop is now. If there’s a big superhero movie now, they go to hip-hop artists, whereas it always used to be rock or alternative artists. Back in the day, rock songs were every bit as likely to be the next No.1 as a pop song, maybe even more so at one point. You just don’t get that.

“What was the last rock song that dominated playlists and the radio?” he added. “I can’t even think of anything. There are still plenty of bands performing well but the problem is, most rock artists can’t even stand up to Drake’s fourth week, let alone his first.”

Of course, rock continues to excel in other areas. But a return for live music – an area where BMTH are so popular they sold 30,000 tickets for their 2021 arena tour in a matter of hours, despite the ongoing global uncertainty – is back on hold as another national lockdown begins on Thursday.

“[Not being able to play live] is the shittiest thing for sure,” said Sykes. “But how is it going to happen when the planet is this way? Ten thousand people all moshing, jumping and running into each other… If someone wanted to come up with the best way to spread coronavirus, it would be a metal concert. If I wanted to whine about something – and I don’t, because I’m grateful for everything I’ve got – it’s that a rock concert just doesn’t lend itself to being socially distanced.”

* To read our Bring Me The Horizon cover story, get the new Rock Issue of Music Week, available now, or click here. To order your copy of the magazine, please email musicweek@abacusemedia.com. To subscribe to Music Week and never miss a vital music biz story, click here.