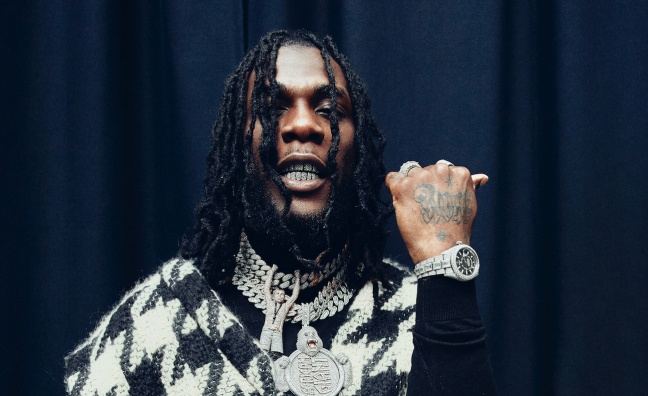 Burna Boy has told Music Week he’s proud to be a pioneer, as his impact continues to reverberate around the world following the release of his Twice As Tall album.

In the wake of his latest Grammy nomination, Burna Boy is on the cover of the new Music Week as he and his team tell the story of how he became a music business superpower.

Since he released his debut album LIFE in 2013 via Aristokrat Records in his home country of Nigeria, Burna Boy has become one of the most in-demand musicians on the planet, collaborating with Beyoncé, Ed Sheeran, Sam Smith, Wizkid, Damian Marley and many more.

In our cover interview, the 29-year-old said it makes him happy to know that his music is resonating. More than that, through his work with a raft of UK acts – including Dave, who featured Burna Boy on Location, which has 1,490,572 sales, and Stormzy, who is a guest on Twice As Tall – Burna is helping to shape future generations of British music.

“It brings a lot of joy,” he told Music Week. “There are a lot of younger generation UK artists that obviously wouldn’t be here if there was no Burna Boy. That makes me understand the gravity of the responsibility on my shoulders.”

Burna Boy releases his music via his own Spaceship Entertainment label in partnership with Atlantic/Bad Habit. Together with Bose Ogulu, his mother and manager, and his sister Ronami, Burna launched records and publishing business Spaceship Collective earlier this year. His other sister, Nissi, is signed as an artist.

Yet Burna Boy distances himself from the wider music business.

“For me to consider myself part of an industry would mean I have to dance a certain tune or act a certain way to be able to excel,” he said. “I believe I’m an individual who has a message and puts his message in his music and just lets everything else just be everything else. Being part of an industry would mean there are people I’m competing with, none of that applies to me. I’m just me, I’m here on my own. I look left and all I see is me. That’s not really an industry, is it?”

He added that working with friends and family through Spaceship Collective “keeps me happy”.

Burna won the BET Award for Best International Act earlier this year, and last week picked up his second consecutive Grammy nomination. His second BRITs nod could be about to follow. Twice As Tall has more than 200 million global streams so far, and with a No.11 debut and 15,819 sales so far (OCC), it’s his highest-charting UK release so far.

Being part of an industry would mean there are people I’m competing with, none of that applies to me

“I feel accomplished, there’s a bridge that has been built that wasn’t really there before the album,” said Burna Boy. “A bridge becoming solid between Africans in Africa, Africans in the world and people in the world in general. It feels like my mission is getting closer to the accomplishing stage.”

Burna Boy promotes a pan-African message, and speaks out against discrimination and marginalisation in his music. But he said that Twice As Tall is much more than a protest album.

“Yes I am sad, and yes I am hurt by my environment, but at the same time, I’m happy about the things that are there to be happy about,” he said. “It’s all about the good side, the happy side, the sad side and, most importantly, the revolutionary side. It takes a lot of elements to make a person.”

Burna Boy has been trended frequently on Twitter this year, recently calling out the violent suppression of the movement against police brutality in Nigeria. He released a new single, 20.10.2020 to express his feelings on the matter.

“No matter how those responsible try to cover things up, the world can see and that’s all I care about,” he said. “It’s the quickest [song I’ve done] but it’s the most necessary. The situation is a lot bigger than me. I try to make sure the right light is shed in the right places.”

“I’ve made protest music since I started,” he added. “I’m from Nigeria, so we have every reason to protest. A lot of people in other parts of the world are already fighting for a revolution, but we have more reason to fight and we don’t fight enough, that’s why I’ve always put it in my music. That’s my punching bag.”

Burna Boy has spent much of the year in London, after arriving from Lagos, where he completed Twice As Tall, to promote the album. He headlined BBC Radio 1Xtra Live in October and played a show for MelodyVR at O2 Academy Brixton.

“When I’m performing [now], I’m performing for myself and for my band and cameras, the whole thing is changed,” he said. “[Earlier this year] I started thinking I might never perform again. It’s an emotional rollercoaster, but every disappointment is a blessing, everything happens because it’s supposed to.”

Burna Boy also spoke extensively about the influence of African music on the UK.

“You have to understand that the fruits you pick in the UK have their roots in Africa,” he said. “Everyone who enjoys apples, at the end of the day you have to thank the tree. You have to go back to the tree to make sure it’s blessed. That’s the relationship between African music and the UK, it is the root of what you see today in the UK. I feel very proud and honoured to be one of the pioneers of that.”

He said the launch of the OCC’s Afrobeats chart is “most definitely a good thing”, but warned that it must maintain a direct connection with artists in Africa. “If you’re going to have an Afro chart, you should be in Africa making sure you’re in tune with what’s going on, so you don’t put something that’s only big in the UK on the chart,” he said.

Look out for more from Burna Boy on musicweek.com this week.