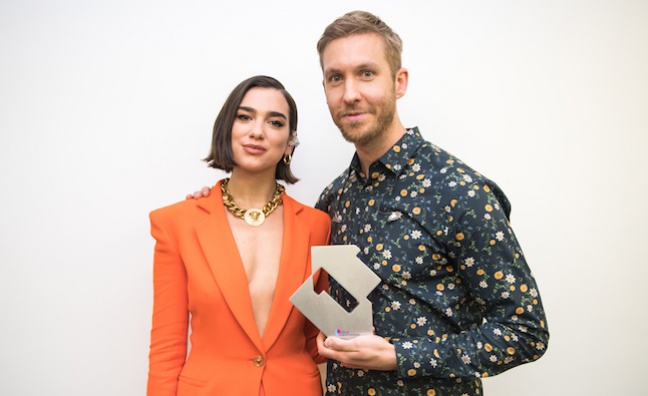 Dua Lipa and Calvin Harris edged out Drake to secure the biggest-selling single of 2018.

According to the final figures from the Official Charts Company, One Kiss came out on top with combined sales of 1.57 million based on 137m audio streams, 15m video streams and 244,000 downloads.

Dua Lipa, who returns with a new single this month, also made No.11 with IDGAF and No.20 with 2017 chart-topper New Rules. Calvin Harris made No.8 with Sam Smith collaboration Promises.

The Canadian superstar had multiple entries with Nice For What (No.7) and In My Feelings (No.15).

The Greatest Showman was unbeatable after a record-breaking run at No.1 in the albums chart. It ended the year with 1.6m album sales, while combined music and video (DVD and Blu-ray) sales reached 4.3m.

Other soundtracks in the Top 10 included Mamma Mia! Here We Go Again and A Star Is Born. Ed Sheeran’s ÷ was the third biggest album of 2018, following its stellar performance in 2017.

Most of the Top 10 overall albums, including Now compilations, had more physical than digital sales – the exceptions were releases by Drake, Post Malone and the 2017 Sheeran album.

The final placings were confirmed following new figures from the BPI and ERA on the recorded music market in 2018. The BPI announced that 142.9 million albums or their equivalent were purchased or streamed - up 5.7%. Streaming now accounts for 63.6% of music consumption.

However, UK breakthrough acts struggled in 2018. Tom Walker made No.36 in the overall singles with Leave A Light On, while Anne-Marie had the biggest debut album with Speak Your Mind (164,865 sales) at No.26.

The slow-burning success of 2018 was Feel It Still by Portugal The Man. The track finished it No.10 overall, having first charted in August 2017.

While Girls Like You by Maroon 5 feat. Cardi B only made No.26 in the overall singles chart, it topped the video streaming chart for 2018. The OCC changes its rules last year to incorporate video streaming data from platforms such as YouTube.