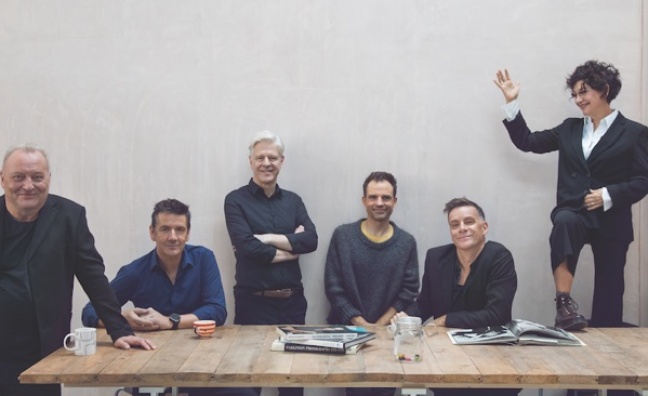 EarMusic’s UK MD Jonathan Green has told Music Week that the label is planning for more albums chart success for Deacon Blue with their new Riding On The Tide Of Love LP.

The band were planning to be on tour for most of last year and had no plans to release a new record in 2021 – until the pandemic intervened. Now, hot on the heels of City Of Love –which hit No.4 last March and has 13,414 sales to date, according to the Official Charts Company – comes an unexpected follow-up.

Glaswegian pop rockers Deacon Blue first formed in 1985, and last year’s chart bonanza has left them and their label hungry for more. Arriving as an eight-song companion piece to its predecessor, Riding On The Tide Of Love is chasing a Top 10 finish this week, and with partners including Townsend Music and Absolute on board, EarMusic has high hopes for the record.

Riding On The Tide Of Love is an unexpected release, what are your main hopes for it?
“Our hope is to deliver another significant UK album chart success that engages Deacon Blue’s audience and takes them through this latest lockdown. Our goal was to build on, and continue, the success of the City Of Love album campaign of 11 months earlier. The band had just achieved a UK No.4 album – their highest UK chart position since 1993 – when the pandemic hit. The momentum from Riding On The Tide Of Love will take both albums through to the huge Autumn 2021 tour, which was delayed from 2020. The album came about initially following a lunch on the last day of the City Of Love promotional tour, in the week before lockdown 1.0. I met with Ricky Ross, manager Tom O’Rourke and plugger Claire Paxton Rider and asked Ricky if he had a new song that could keep our momentum going. Ricky said that he thought he had, and sent through the demo of Riding On The Tide of Love, which he had rediscovered only after City Of Love had been delivered.”

Does the momentum of the campaign for City Of Love to fuel this new release?
"This is a both campaign for a new release, and a re-promotion of City Of Love as the projects belong together. They were written in the same creative period, and some of the new songs were also partially recorded then. Creating a new album had additional impetus as lockdown threatened an extended hiatus before touring returned."

How important has D2C been for the campaign so far?
"Deacon Blue’s fans are enthusiastic participants with D2C, and we worked with Bruce Mckenzie at Townsend on both City Of Love and Riding On The Tide Of Love. The bundles include special vinyl editions made at EarMusic’s Edel family company Optimal, along with beautiful signed artwork prints. D2C is a bedrock on which we build a strong wider retail picture."

Where do Deacon Blue sit when it comes to streaming?
"The label has global digital distribution from another Edel family company, Kontor New Media (KNM) who set up Deacon Blue with DSPs. City Of Love has been the band’s biggest streaming success of their post-1993 era. It is consistently in their Top 10 songs of all time, and streams are fast approaching their best-loved catalogue songs of some 27 years ago. As with City Of Love, Riding On The Tide Of Love has been initially driven by support from UK radio – especially BBC Radio 2 and regional BBC stations. We have seen that the initial radio support builds the audience engagement with new songs, which then drives streams. There is an on-going opportunity for the DSPs to further increase their older audience, by innovative playlist support for the breakout songs for artists with proven creative longevity. Our focus is not just on emphasising back catalogue as low hanging fruit, but on engaging their current audience with consistently appealing new music."

Is indie retail a big part of proceedings, too?
"Deacon Blue and EarMusic, along with our UK distribution partner Absolute, are major supporters of the indie retail community. We have consistently released stunning vinyl editions and developed personal relationships with the retailers to ensure this can grow for future releases. Lockdown has only made us focus even more on the essential indie retail network; both physical and online."

Finally, what are the international prospects for the record?
“Riding On The Tide Of Love builds on the international hard work done in Hamburg by everyone at the label. Max Vaccaro, Anja Obersteller and Isabelle Albrecht all worked on the successful City Of Love and Believers campaigns that helped Deacon Blue return to Spain and Australasia, while building their growing market in Germany. The increased use of technology – Zoom especially – has meant that international promotion can successfully be accomplished without risky travel, ensuring the continued health of the band until the autumn tour takes them into the market again."