Ellie Goulding on Juice Wrld, Amazon and her third No.1 album 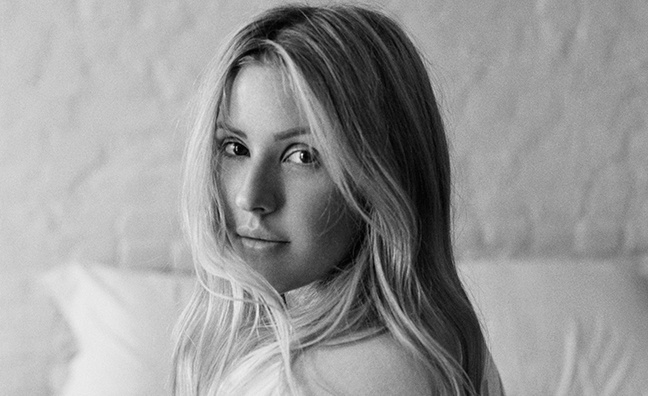 Ellie Goulding has told Music Week her new album Brightest Blue has been a "long time coming" as it debuts at No.1 on today's UK albums chart.

Brightest Blue landed at the summit after seeing off Bob Dylan’s Rough And Rowdy Ways by 14,820 sales to 11,814, according to the Official Charts Company.

"It's been a long time coming because I wrote it a couple of years ago," said Goulding. "But I feel it still has that magic there. I still listen to it and feel like it hasn't dated. For me, it hasn't really lost its meaning. I'm married now, but the album was so focused on this feeling of independence and strength in finding that kind of love for myself, so it still means a lot to me.

"I definitely haven't released it as soon as I wanted to, but circumstances have dictated otherwise and I try as much as I can to blame things on being meant to be. Maybe it just wasn't supposed to be released any earlier and maybe it's going to be a good album for this time, I don't know. But it's been a really strange few years, there's been a lot of change.

"I was doing the same thing over and over again for a long, long time - touring, the same TV shows, the same performances and I just thought that would last forever. I was like, 'This is my life now', and then suddenly it wasn't my life anymore. That's how the album came and that's how I was able to finally focus on myself and my personal life and sort myself out a bit."

Originally scheduled to be released in early June, the record was delayed due to the Covid-19 pandemic.

"I think it's good to release an album in a time like this," remarked Goulding. "People just want to hear new music and at this point you just have to allow yourself to release something entirely for them and not think about how it can benefit you. I am not going to hold it back because it's not going to be a good time for me. My fans have waited long enough!"

Brightest Blue has not only become Goulding's third No.1 LP, but Polydor's fourth chart-topping album in as many weeks after deposing Juice Wrld's Legends Never Die at the summit. The late rapper duetted with Goulding on the 2019 hit Hate Me, which appears on Brightest Blue.

"He was a very sweet person, very talented and God, it is always so sad when somebody dies just as their career is taking off," said Goulding.

“I’d split with my previous management, not because we had differences, but because one of my best friends in the world, Cassandra Gracey, wanted to work at Sony," explained Goulding. It had been a dream for her to run a creative thing and I was so supportive of it, and still am. But our music relationship was so solid and impenetrable that, when she left, it was quite hard for me to continue that commitment.

"There were so many other factors – stuff in my private life – and then Jamie [Lillywhite], who had managed me for a long time and was one of my closest friends, moved to LA, so it felt like a natural end. And it was so amicable – my lawyer said it was the most amicable [split] he’d ever seen between an artist and management. I have so much respect for First Access and I’ve got so much respect for Sarah Stennett. I’m sure I have her blessing with Tap.”

Goulding scored a surprise No.1 single in late 2019 with her cover of Joni Mitchell's River (212,291 sales), despite the track only being available on Amazon Music.

"It was just a lovely bonus," said 33-year-old Goulding. "I already was very proud of the cover. I didn't expect to remotely do justice to a Joni Mitchell song, but when I heard it back – and I'm very down on myself – I was happy with it and I just pushed the boat out and let it sail.

"It just so happened that Amazon were like, 'We want to release this as our Christmas song'. I'd never worked with Amazon, I'd had previous experience of working with a big retailer with John Lewis [covering Elton John's Your Song for the department store's 2010 Christmas TV advert]. I remember that day and I was flustered, so I did this song and it was kind of same with River. I felt like the only joy for me was that I got to cover one of my idols.

"Sometimes, it's hard to think, 'Oh, Amazon, how exciting!' But it was quite interesting to see such a force behind something. And it's like, is that the future? Is that what we all need now? It's such a saturated market, maybe it is the future. I try to be really open to the future of music, because I think it's so pointless to stay in the past. I've always embraced new music and new ways of making music, I love the idea of experimentation and finding different ways of plugging new music and so I'm open to that, I think that's really important."