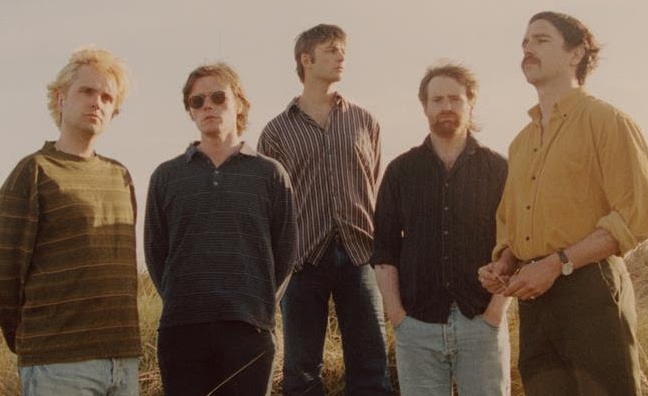 Fontaines DC are riding high with their second album, A Hero’s Death.

After an unlikely chart battle with Taylor Swift, it opened at No.2 earlier this month and has sales to date of 22,876, according to the Official Charts Company.

While the success of their sophomore release has been a cause for celebration, Fontaines DC have since spoken about the grueling schedule they faced as an ambitious young band.

“We ran Dogrel dry for ourselves, you know?” Chatten told Music Week. “The time where we could listen to a song from Dogrel and enjoy it as listeners had long passed. So our taste in music was very affected by our lifestyle, and how crazy, hectic and relentless our touring had become. We turned towards dreamier landscapes, slower songs and more tranquil sounds, because that’s where we wanted to put our heads.”

“Absolutely,” said Chatten. “It’s dangerous, you know, even without the drugs. The big killer for us was a lack of sleep. We’d have a flight in between gigs as our allocated sleep time. So that was rough and made us very bitter about the whole thing, and we started to see each other and everyone we worked with as the devil.

“Then we started to realise that we were bringing it all upon ourselves, and we started asking ourselves again, ‘What exactly do we want out of it?’”

Chatten and the band realised they didn’t have to say yes to every gig and promo opportunity. They’re set to resume touring in Australia in December, followed by European dates in 2021. They play their biggest UK headline show to date at Alexandra Palace on May 27.

“A huge thing for us was just being clever about routing on tours and ensuring that you can get some time off, or that you’re not doing too many drives after gigs,” he added. “These things add up and they can destroy [a band].”

The Fontaines DC frontman credited the support of fellow artists during the band’s rise.

“Kate Tempest has been really good and Nadine Shah,” said Chatten. “And Joe Talbot from Idles, particularly around that [US] tour, he just really looked after me. When we toured with Idles in America, I think they had just come out of their growing pains, whereas we were just about to go into that. So it was good to have a band like them around. I loved touring America; it was hard but I loved it.”

Fontaines DC are making an impact across Europe with their second album. But Chatten said the reaction has not always been what they expected when touring certain countries.

“When we were playing in Poland the first time, Carlos [O'Connell guitarist], went into the crowd and kissed a lad, it was one of the lads in the crowd who was going crazy in the front row,” said Chatten. “He kissed him on the cheek – and they all hated it! They were so angry. But it's good to have that sense of opposition every now and then.”

Being signed to an independent label, Partisan Records, has also been important for the group.

“There’s certainly a sense of autonomy,” said Chatten. “I don’t have an experience with a major label, so I don’t really know how true the horror stories are, or whether or not you go about your day with a sense of pressure over you.

“A major label spots potential; they have a vision and they want to bring you into that vision. Whereas independent labels, in my experience, want to discuss what it is exactly that you are doing. When I met Partisan there was literally talk of writing a manifesto, just so that everyone felt the same way about the band. That kind of dialogue is probably exclusive to independent labels now.”

To read the full interview with Fontaines DC and Partisan, subscribers can click here.