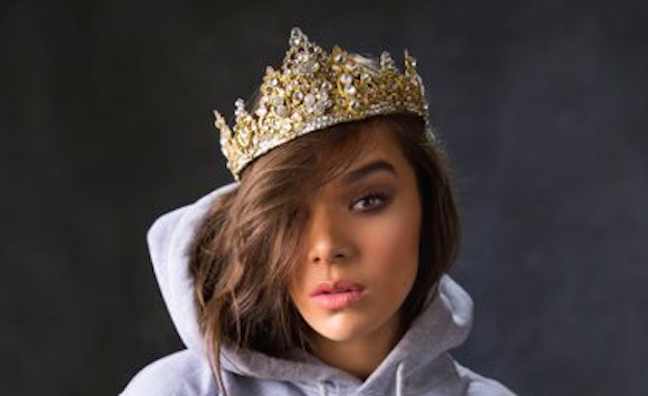 The singer’s most recent single, Starving, was co-written by Warner/Chappell songwriters Asia Whiteacre and Noise Club and reached Platinum status in America, as well as entering the Top 5 of the airplay chart. Its follow up Most Girls was released in the US last week.

Steinfeld said, “I’m honoured to join the many incredible talents who call Warner/Chappell home, and I know that this team will give me the support I need to express myself musically and continue to grow as a songwriter.”

Katie Vinten, SVP & Co-Head of A&R, US, Warner/Chappell Music added: “Hailee is a creative whirlwind, whether it’s in the recording studio, in film, or on stage. The entire Warner/Chappell team is thrilled to have her in the family, and we look forward to collaborating with Hailee to take her musical career to new heights.”

Steinfeld, who rose to fame as an actor in True Grit aged 14, has recorded songs with Machine Gun Kelly (At My Best), Shawn Mendes (Stitches), DNCE (Rock Bottom), Kato & Sigala (Show You Love), and Prince Fox (Fragile). She will soon reprise the role of Emily Junk in the upcoming film Pitch Perfect 3.

Her 2010 performance in True Grit led to critical praise and a slew of awards, including a Young Artists Award and a Broadcast Film Critics Association Award, as well as nominations for an Academy Award, a BAFTA Award, and a Screen Actors Guild Award.

Also an Oscar nominee, Steinfeld went on to feature in Begin Again and Pitch Perfect 2, which ultimately led to her signing a recording contract with Republic Records and releasing her 2015 debut EP, Haize. Steinfeld recently appeared in The Edge of Seventeen, for which she received a Golden Globe nomination for Best Actress - Motion Picture Comedy or Musical, as well as an MTV Movie & TV Award nomination for Best Actor in a Movie.