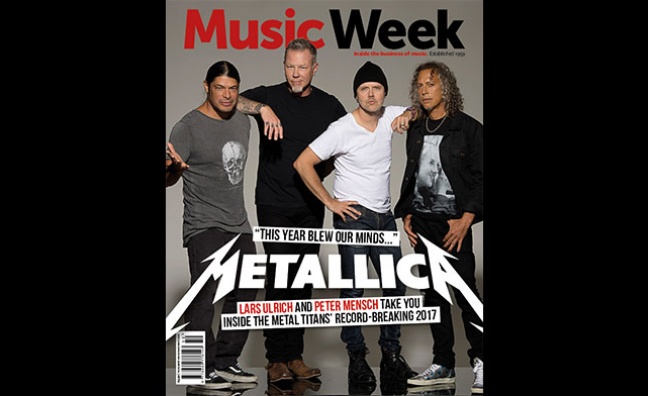 In the new edition of Music Week, we take a look back at metal  giants Metallica’s triumphant 2017. The band released Hardwired… To Self-Destruct, their double-disc 10th album, back in November 2016 and it has since gone on to shift 138,453 copies to date, according to Official Charts Company data. It also helped them break attendance records on their October UK arena tour. In a rare interview, Peter Mensch - who co-manages 'Tallica alongside fellow Q Prime veteran Cliff Burnstein - hailed Metallica's performance in 2017, stating that, "There’s nobody even close to them".

In the interview, Ulrich talked about Hardwired…’s success, how the band have learned to put themselves first before business and why they will never be the band that the world wants them to be.

“The way this album connected with Metallica fans all over the world actually overwhelmed and shocked us and, obviously, was very invigorating,” Ulrich told Music Week. “Also, the amount of new people, younger kids, that came onboard was really stunning. From a critical point of view, from a commercial point of view, from almost any angle, this record blew our minds.”

On top of the record's success, Metallica also broke records this year, with their opening night at London’s O2 Arena pulling in a crowd of 22,134. The following night they broke their own record with a crowd of 22,211. It was a similar story elsewhere, with a crowd of 13,111 in Glasgow’s Hydro and a record-breaking crowd of 15,604 in Birmingham.

For the first 25 years of the band it was the band first and the individual members and needs second. Somewhere along the way that model got flipped

Ulrich also revealed that a change in business strategy, one that puts the people at the heart of Metallica first, has helped the band, specifically when it comes to touring.

“For the first 25 years of the band it was the band first and the individual members and needs second," explains Ulrich. "Somewhere along the way that model got flipped and it became the individual members and their needs first and then the band second. When that happened the whole thing loosened up a little bit and became a healthier unit. We spend what I would call, and what I can sense from being around our peers, an unusual amount of time, resources and energy on the well-being of the band.

“We put everything we can into making sure we have a healthy unit; we’re betting on our longevity as the right model for us,” he added.

Ulrich also dissected the creative restlessness that has defined Metallica's activity in recent years – be it recording the experimental 2011 album Lulu with the late Lou Reed, starting their own festival or recording their IMAX concert movie Through The Never. He also took time to address his comments in a 2012 SPIN interview in which he said that if Metallica were to become the band everyone wants them be it would kill them. Ulrich clarified what it is, precisely, that he thinks everyone wants them to be.

"What I was attempting to say is that in the somewhat conservative corners of the hard rock world there is a desire to have the bands put out the same record every couple of years, with the same sleeve, the same creative approach and be predictable,” said Ulrich. “I’ve always said that’s not the band that we’re interested in being. We’ve fought against that for over three decades. We’ve always stood very hard against being pigeon-holed. We really like doing things our way.”

You can watch footage of Metallica playing London's O2 Arena below.