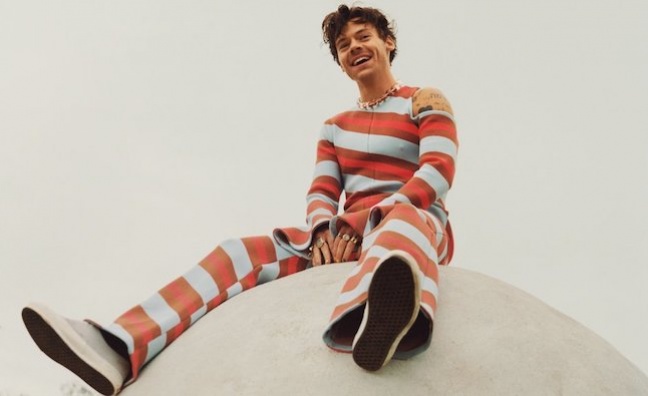 How big is Harry’s House going to be - and can it match the streaming longevity of Fine Line?

The album is back at No.1 for its third non-consecutive week - the longest spell at No.1 for any act this year - and has sales to date of 224,842, according to the Official Charts Company.

Based on the first five weeks’ exclusive data from the OCC, Music Week can reveal that Harry’s House (Columbia) is outperforming Fine Line in the UK by almost 200% in terms of streaming consumption at the same stage of release. Fine Line was also, of course, a streaming success and chart fixture upon release.

Harry Styles even managed to beat Drake to No.1 in the UK this week as Harry’s House returned to the summit with weekly sales up 11.4% at 27,468. The new album has received a boost from his UK tour including two Wembley Stadium shows last weekend.

Drake had to make do with a No.2 finish following the surprise drop of Honestly Nevermind (Island/OVO/Republic). The Canadian star’s digital-only album was just 345 sales behind Harry Styles, although Honestly Nevermind was the most streamed LP in the UK of the past seven days. It should also secure a US No.1.

Harry’s House had a big week one sale last month of 113,812 sales. That was the biggest result since Adele’s 30 (Columbia) - and Styles’ week one album equivalent streams of 45,388 were actually higher than Adele’s total (44,190). In that first week, Harry’s House achieved the fifth biggest week on record for album streams. Since then, it has not dropped below No.2 in the UK chart.

Of course, streaming is the key to longevity for a contemporary album release. So while the opening for Harry’s House was impressive, it needs to maintain its weekly performance if it’s to match the success of its predecessor. Fine Line is at No.7 on this week’s chart and has total sales to date of 626,873.

Styles’ sophomore album was regularly Sony Music’s biggest album globally in quarterly revenue terms for a couple of years, and it seems likely that Harry’s House will be riding high in the rankings when the major announces it’s next set of results.

Harry Styles is currently the fourth biggest artist in the world based on Spotify monthly listeners of 74,763,167, behind the Top 3 of Ed Sheeran, Justin Bieber and The Weeknd. In the Top 10 list of popular Harry Styles songs on Spotify right now, nine are from Harry’s House alongside Watermelon Sugar. As It Was has 774,101,217 global Spotify streams, with Late Night Talking on 142,160,364 and Matilda on 94,325.

Cumulative streams for the tracks on Harry’s House are now above 1.5 billion on Spotify.

So how does streaming consumption for Harry’s House compare to Fine Line? Based on Music Week analysis of OCC streaming figures for the UK, it has outperformed its predecessor every week by a significant margin.

The biggest increase on streaming consumption for Harry’s House compared to Fine Line was actually in its latest chart week.

Of course, it’s not entirely like-for-like as Fine Line was released in the depths of December, compared to the new album’s summer drop to coincide with a run of huge UK dates. Nevertheless, it’s an indication that Harry’s House is getting repeat plays from fans on DSPs, which delivers a consistent weekly chart performance.

Surprisingly, Fine Line never reached No.1 in the UK. Even though it opened with an impressive sale of 50,720, it debuted at No.3 in a busy Q4 week in 2019. The album remained in the charts and was boosted by the single release of Watermelon Sugar in May 2020.

Ultimately, Fine Line peaked at No.2 over a year after its release. It is still in the Top 10, with sales up 16% week-on-week to 6,145 following the UK stadium shows.

Team Styles now just have to secure their campaign victory with the album’s second single, Late Night Talking. It’s the follow-up to lead track As It Was, which spent 10 weeks at No.1 and has 806,435 chart sales to date.

But Harry’s House clearly has strength in depth in terms of possible singles.

Late Night Talking at No.9 (178,158 sales to date) and Music For a Sushi Restaurant at No.11 (154,769 sales to date) complete the three tracks in the chart allowed for a primary artist under OCC rules. Looking at the raw streaming and sales data, Harry Styles would have had six other tracks in the latest Top 50 but for those chart rules.

Based on its early streaming performance, then, Harry’s House is clearly going to be a hugely popular destination throughout the summer of 2022 and beyond. Expect it to reach two billion cumulative streams on Spotify before long, and then keep going…