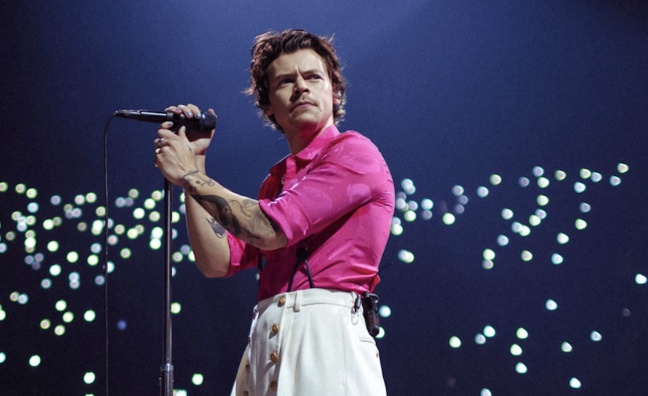 Harry Styles’ Fine Line campaign is still going strong more than a year after the record’s release, and the Grammys could provide a further boost this weekend, with the singer nominated in three categories.

At the BRITs last year, Styles was shortlisted for British Male, with Fine Line among the nominees for British Album. Styles delivered a memorable performance of Falling at the ceremony, and he’s among the performers lined up for the Grammys, where Watermelon Sugar is up for Pop Solo Performance, Adore You is shortlisted for Music Video and Fine Line is nominated for Pop Vocal Album.

Styles launched the campaign for Fine Line with a Music Week cover story back in December 2019, when we joined him in rehearsals with his band in North London. Sony Music Group CEO Rob Stringer and Jeffrey Azoff of Full Stop Management spoke alongside Styles in the interview, which is available online here.

Since then, we’ve told the story of the Fine Line campaign every step of the way – from its platinum sales milestone to the story of the video for Treat People With Kindness – with Styles’ co-writer Kid Harpoon telling the tale of Watermelon Sugar in February edition of Music Week.

Here, we look back at our cover interview with Harry Styles, Stringer and Azoff and how they told the story of the album that fired him into another stratosphere…

Harry Styles: “The fact that the first album wasn’t necessarily a radio record, but I could tour it and people came to the shows and enjoyed them, made me feel I had some sort of freedom to make what I wanted to, and I wanted to make some fun songs.

“Coming off the road, there was a definite feeling of, ‘OK, now I know what it feels like to play a show on my own, what do I want the songs to be like if I’m going to tour again?’ And so I definitely went into it with a freedom, that I didn’t have, or didn’t allow myself to have, last time.

“I was a little subconsciously afraid of making fun music having come out of the band. I tried to get rid of that a little bit.”

HS: “I went through a lot of self-reflection. Having been through one [solo] album and one tour, it made me look at everything and be like, ‘OK, what do I want to do?’ and ‘Who am I if I don’t do this?’ You know, and also just questions that you ask when you’re not 18 anymore.”

Rob Stringer: “Harry, Jeff and I decided to keep it all very, very tight and get a load of things done behind closed doors, to stockpile as many ideas [as we could].

“We made it over a longer period of time than the last one, it was this really exciting thing that we knew would be different to coming off the back of One Direction into the first solo record. We knew we had more space, that’s what was exciting. We did it without as much pressure as there was off the back of 1D. It was more languid, which was great.”

Jeffrey Azoff: “Harry is a unicorn. For [the] music [industry], it couldn’t be more important to have someone with the platform Harry has who’s willing to take risks and put music out that would be considered untraditional, I can’t applaud him enough for putting music out that people didn’t see coming.”

HS: “I wanted the song Treat People With Kindness to do what the mantra, if you will, did on the tour.

“It’s universal and important, but it’s a small change that makes a big difference. Just being a lot nicer to each other rather than, “Don’t do this, don’t do that, ‘Not this, yes that,’” It’s just, ‘Treat people with kindness…’”

“When I wrote it I wasn’t sure if I really liked it or really hated it. Then I realised that wasn’t necessarily a bad thing.”

HS: “I feel pretty good, really excited. This is definitely the most excited I’ve been about something I’ve made. The making of this album was so much more joyous than the last one, so the music and everything around it feels a lot more joyous.”