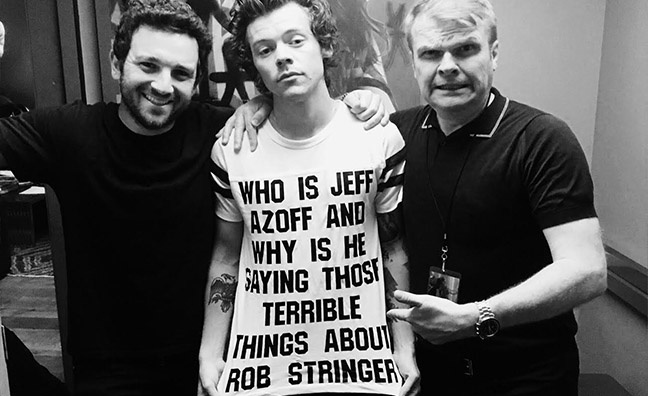 Sony Music Group CEO Rob Stringer is excited by the potential Harry Styles has to make records way beyond the Fine Line campaign.

Styles is this week’s Music Week cover star, and the singer and the team ushered us behind the curtain of one of the most-anticipated releases of the year. Stringer (pictured above, right, with Azoff, left, and Styles) acknowledged that he “can pick and choose” the acts he works closely with given his “position in the company” and said he’s seduced by the singer’s “uniqueness”.

We met Styles in rehearsals for a promo run that has taken in performances on Saturday Night Live, Later… With Jools Holland, Capital’s Jingle Bell Ball and will call at The Forum in Los Angeles this week. Stringer, who was speaking alongside the star’s manager Jeffrey Azoff – and there’ll be more from him later this week – couldn’t hide his excitement that Fine Line is finally upon us.

We’ve already brought you the first taste of Harry Styles’ Music Week interview, which subscribers can read in full online here, now, read on for an extract from our conversation with Stringer, the man who signed Styles to Columbia and has a plan to cement his position as the biggest and most intriguing star on the planet.

How did the Fine Line campaign start to take shape?

“Harry Jeff and I decided to keep it all very, very tight. Harry had so many ideas that the three of us wanted to get a load of things done behind closed doors. We made the record over a longer period of time than the last one, so we had more time to come up with ideas. It was like we were working on this really exciting thing that we knew would be different to coming straight off the back of One Direction into the first solo record. We knew we had more space, that’s what was exciting. We did it without as much pressure as there was off the back of 1D. It was a more languid process, which was great.”

So if the pressure was off, Harry could make what he really wanted?

“You can’t buy time. Time’s the most important thing. When he was in One Direction he was 16 years old, now we’re nearly a decade on. You’re dealing with a person who’s grown up in a really beautiful way and we’re trying to help him reflect that. It’s our job to help him make those leaps. He’s willing to make those leaps and you’re happy to go along with him because he does have that ability to understand who he is. Jeff spends an enormous amount of time with him. This isn’t somebody who’s figuring out who he is, he knows who he is, very clearly. Our job is to reflect that and it’s really not difficult. He is stretching and challenging himself, and as the record company that’s what I want an artist to do, to challenge and push the boundaries. That’s the most important thing. It’s great to be there with them, it’s great to be involved in a project when the artist wants to do that.”

From the album art to the Adore You video, it looks like it’s been a fun campaign to work on…

“Even the bickering has been fun! It’s very important to stress, we did this behind closed doors. A lot of the ideas, we’ve been working on these for months, we had a whole gamut of stuff to go with when we finally launched. It makes me smile thinking about all that stuff. It was over anything and everything. Harry is incredibly focused and strong-minded, it’s always fun to deal with an artist on those levels, it’s much better. You don’t want to work with artists who have one idea, you want to work with artists who have a lot of things they want to get done. We’ve got so many more ideas to come. Now we can enjoy it and Harry particularly can enjoy the process, too.”

Now we can enjoy it and Harry particularly can enjoy the process, too

“I think he is unique. Pop can be very formulaic, and this record isn’t formulaic. It just isn’t. There is nothing formulaic about him whatsoever. That was very important to everyone involved. From a personal point of view, I’ve worked with a lot of artists over the years and the truth is it’s his uniqueness that attracts me, I want to work with those artists after all these years still. If someone’s got that ability to do something different. This is a long-term process. We’re excited where he goes next, and after that. You watch it and you just know that it has something special and unique about it, which isn’t always the case, even though something might be very successful that isn’t always the case.”

To order a copy of this week’s issue email Rachael.hampton@futurenet.com. To subscribe and never miss a big music biz story, click here.