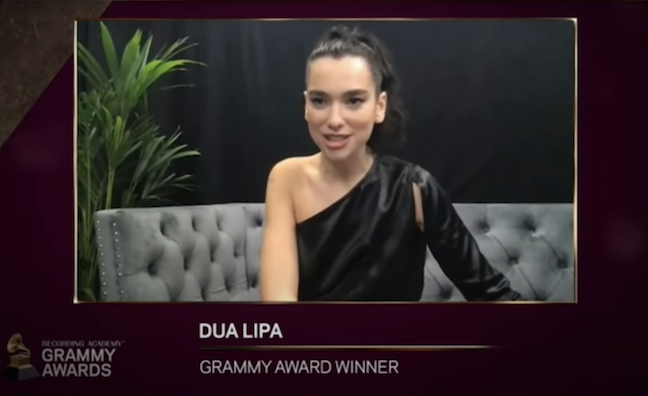 Dua Lipa has received six nominations at the Grammys, including the main categories of Album Of The Year (Future Nostalgia), Song Of The Year and Record Of The Year (Don’t Start Now).

She is one of several UK acts up for awards this year, including Michael Kiwanuka, Coldplay and Harry Styles, who has three nominations (including Best Pop Solo Performance – Watermelon Sugar and Best Music Video – Adore You) although none in the major categories.

If that was considered a snub for Styles following his hit sophomore album and US No.1 for Watermelon Sugar, it was nothing compared to The Weeknd. The Canadian artist branded the awards “corrupt” after failing to secure any Grammys recognition from the Recording Academy voting members, despite the success of his album After Hours and the huge hit Blinding Lights.

“The Grammys remain corrupt,” he posted on social media. “You owe me, my fans and the industry transparency…”

The Grammys remain corrupt. You owe me, my fans and the industry transparency...

“We understand that The Weeknd is disappointed at not being nominated,” responded Recording Academy chair and interim president/CEO Harvey Mason. “I was surprised and can empathise with what he’s feeling. His music this year was excellent, and his contributions to the music community and broader world are worthy of everyone’s admiration.”

The Killers, who were also ignored this time, responded with a playful, Trump-style tweet.

Dua Lipa, who won Best New Artist two years ago, read out some of the nominees during the livestream, along with other past winners including Imogen Heap, Nicola Benedetti and current nominee Megan Thee Stallion.

Dua Lipa is equal with Taylor Swift and Roddy Ricch on six nods for the 2021 awards. Beyoncé leads with nine nominations. The ceremony will be livestreamed on January 31.

Last year’s big winner Billie Eilish received four nominations this time. BTS became the first K-pop group to receive a nomination – the boy band are up for Best Pop Duo/Group Performance for Dynamite – though they were otherwise ignored.

Dua Lipa is joined in the Album Of The Year category by fellow UK acts Coldplay (Everyday Life) and Jacob Collier (Djesse Vol 3). Collier has been nominated for three Grammys, following his previous four wins at the ceremony.

Despite missing out on the major categories, Harry Styles is nominated for Best Pop Vocal Album (Fine Line), where he’s up against heavyweights including Justin Bieber, Lady Gaga, Dua Lipa and Taylor Swift.

Mercury winner Michael Kiwanuka is nominated for Best Rock Album (Kiwanuka), where he’s up against acts including Irish band Fontaines DC (A Hero’s Death) and The Strokes (The New Abnormal). Fontaines DC’s label Partisan also have a shot with Laura Marling (co-signed to Chrysalis), who’s up for Best Folk Album (Song For Our Daughter).

UK acts often do well in the dance categories, and this year it’s Disclosure’s turn. The duo’s LP Energy is up for Best Dance/Electronic Album, alongside a nod for My High (feat. Amine and Slowthai) in the Best Dance Recording category.

The eOne-signed songwriter and producer Fred Again (Fred Again) is nominated for Best Dance Recording for his work on London-based Canadia artist Jayda G’s Both of Us.

Andrew Lloyd Webber shares a nomination with Taylor Swift for his co-write on Beatiful Ghosts from Cats in the Best Song Written For Visual Media category.

"This has been a tough year for our industry but I have witnessed, day after day, the incredible resiliency of the music community," said Mason. "This year's nominated recordings are proof that the creative spirit continues to be alive and well, and our nominees are a testament to the passion and perseverance that our community embodies.

“I'm endlessly amazed that so many music creators continue to use their craft to tell important stories, providing a dynamic soundtrack that both directly impacts and reflects our culture. I truly believe in the power of music, and the 63rd Grammys will be an opportunity to help us unite, uplift and inspire."