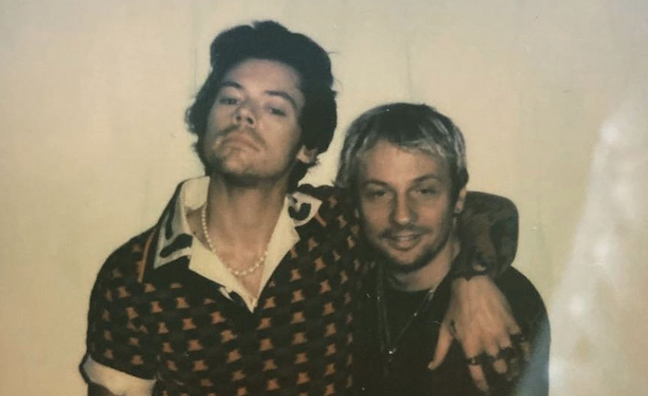 Harry Styles’ Fine Line is a modern pop album with a difference, according to Kid Harpoon (above, right), who worked closely on the One Direction singer’s second record.

With 123,232 sales and a No.3 peak under its belt. Fine Line is nominated in the Album Of The Year category at the BRIT Awards 2020, which take place tonight at London’s O2 Arena. Kid Harpoon (aka Tom Hull) has spoken in depth to Music Week about the making of the album, which took place over 18 months, mostly in Malibu and Bath.

“Harry and I did some songs together on his first album, we got really close and when conversations started coming up about Fine Line, we said we’d try this and try that and it evolved from there,” said Hull, who teamed up with Tyler Johnson and Sammy Witte to work alongside Styles on the songs.

“A lot of the best songs that came out weren’t by anyone in particular, Harry was driving the vision, but the input came from everyone,” Hull said.

He said that his close bond with the singer had a huge impact on the music. “Harry and I would hang out all the time; he’s one of my best friends. I’m older and at a different point in my life, I’m not out there going nuts. I’ve got two kids at home and I’m more settled, so I have time to think differently. It was just a really fun relationship,” he said.

Hull told the story of Falling, which has 74,461,256 Spotify streams. “Harry lives round the corner from me in LA and one day he wanted a lift somewhere, so I popped up there and he was getting out of the shower,” he said. “I started playing piano while I was waiting for him, he was singing and in an hour we had written Falling."

Hull revealed that Cherry was “written at one in the morning, with Sammy, Tyler and Harry a bottle of tequila down”. Watermelon Sugar, meanwhile, was the result of a “catch up” in a Nashville studio while Styles was touring his debut.

“Harry inspires a feeling of, ‘Let’s do something we haven’t done before’,” Hull said. “He wants to make interesting stuff.”

He suggested that the modern industry culture around songwriting sessions was a long way from Fine Line. “A lot of albums are written in sessions. You turn up at 12 o’clock, then leave at 6:30pm with a song. You send that to the label and management, everyone has their opinion and the best 10 or 11 songs made like that get put on the record. But this album was made with a bunch of friends getting into the studio to see what happens.”

Hull said a place on the BRITs shortlist alongside, Stormzy, Dave, Michael Kiwanuka and Lewis Capaldi shows the strength of Fine Line.

“I’m emotionally attached to the album and to Harry as a person. I’m proud of what he’s doing,” he said. People think he can do this or that, but it’s never that easy and he really pushes himself and puts himself out there.”

Read the full Kid Harpoon interview, as well as story of each record shortlisted at the BRITs, in the new edition of Music Week out now.