'He's a real anorak when it comes to stats and sales figures': David Furnish on Elton John's 50-plus years in the biz 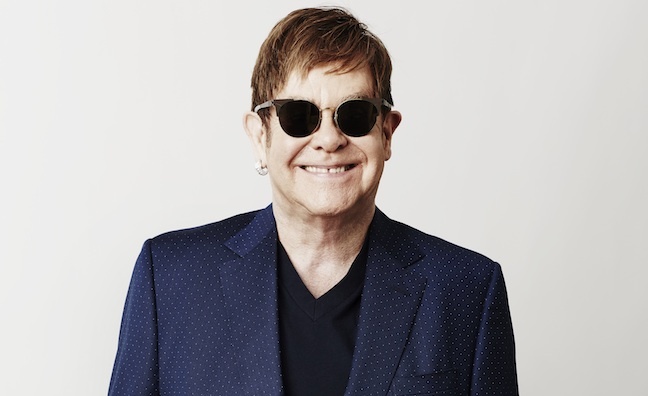 Elton John has released his first greatest hits in a decade, Diamonds, which is heading for a Top 5 finish this week thanks in part to a huge TV launch at the weekend with ITV’s Elton John: The Nation’s Favourite Song.

In the latest issue of Music Week, the music legend’s manager, CEO at Rocket Entertainment and long-term partner David Furnish takes us inside the Diamonds campaign and gives us a glimpse of John’s current relationship with the music industry after more than 50 years of working with lyricist Bernie Taupin. Here's more from Furnish on life with the Rocket Man...

How did you and Elton enjoy working on this greatest hits?

It’s been really fun putting it together. Elton hit some pretty significant milestones over the past 12 months — he turned 70, he’s acknowledged that he and Bernie [Taupin] have been working together 50 years since they met as songwriting partners. In today’s industry that is kind of unheard of — there’s really no successful music songwriting partnership that’s lasted [as long], they’re still collaborating and working together. He wanted to have a greatest hits package that really kind of encompassed the broadest path through his career and one where we could make it available to people in different ways, different formats, because we’re at a really interesting transition point in the music business. The business is changing the way people hear about music, the way they consume music, the way they share music.

Yes, wholeheartedly, he’s embraced streaming. The most important thing with Elton is that he stays connected, both in terms of people being able to discover his music and to keep his music alive and also in terms of being able to discover new artists. In the case of his Beats 1 radio show, it's an opportunity to really encourage them [new artists]. He still consumes music largely traditionally, he still orders his compact discs every week and has them sent to wherever he is, and he puts them in the car and plays them on the systems at home. But the great thing about the Beats 1 radio show, The Rocket Hour, was that it gave him an opportunity to do something he does every week naturally anyway, which is expose himself to as much new music as he can and then give people a chance to discover it in a form that's relevant for today.

What’s his approach to social media with the label and management?

It’s a true collaboration, he doesn’t run it solely himself. We do everything collaboratively. Elton doesn’t carry a phone, but he does carry an iPad so his access to social media is somewhat limited compared to the average person. But everything that goes up on his Instagram, Facebook, Twitter, it’s all run by him, shared with him, he calls the office and says ‘I’ve just heard this great new artist can we say something about them?’ Because Elton’s a bit more old school, I think he sometimes grapples with how much of himself he wants to reveal in terms of the personal side of his life — he feels extremely protective where the children are concerned.

Is he protective of his songwriting legacy?

He takes his legacy very seriously and he’s very proud of it, but the most important thing for Elton is that he continues to look forward, he’s never going to stop. I think the passion the keeps him alive is that he needs to continue to create and write, he needs to collaborate.

His appearance in Kingsman: The Golden Circle with the Saturday Night’s Alright (For Fighting) sync made a big impact…

The great thing that Elton’s prepared to do is not take himself too seriously, so that was a way to pay a nice wink and a nod at a part of your legacy but bring it to a new audience in a really funny, fresh and self-deprecating way.

I actually think Elton knows more about the music business than the average record company executive. He gets all the charts and the new releases for most of the major markets every week. He still gets them by fax which is going to be a problem in about a year’s time when we’re not going to be able to put faxes down digital phone lines any more. He follows and tracks and charts everything, he knows exactly when a record’s going to break, why it’s going to break, where it’s not getting enough push, play or promotion, he’s a real anorak when it comes to stats, sales figures, numbers and he’s able to retain them and process an enormous amount of data. That structure in his life helps to keep him grounded and keep him connected with the greatest passion in his life, which is music. So yeah, he’s very plugged into what’s going on — it’s kind of spooky!

What has he got planned for next year?

He’s going to wind down his residency in Las Vegas, so he’s got another run in February and then another run in May. We’re going to be shooting a live action musical fantasy version of Elton’s life story called Rocket Man, thats going to go into production next  year. I think he feels he needs to take a breather, he needs to step back and take a pause. He’s also working on his memoirs and then we have a few surprises up our sleeve.

Will he continue to tour in future?

Without question, Elton must never stop performing. We all have things that kind of keep us alive in life. Some people relish the idea of a retirement where they do nothing [but] for Elton that would be purgatory. Playing to live audiences is going to be something he always needs to do. I think given our commitments to our kids and our family — and now our boys are nearly seven and five and at that point where they need you present more than ever — it’s important we’re there to support them. So that will have an impact on what we do in the future too.