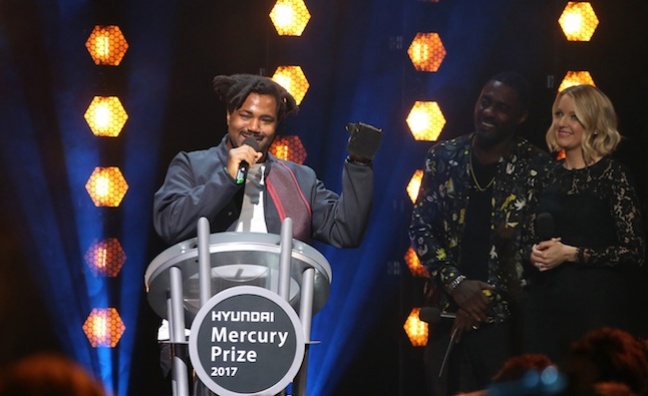 This week Sampha’s debut album, Process, could be heading back into the Top 10 following the singer’s Mercury Prize win last week. It currently sits at No.7, on 3,903 sales. Spotify said that, following his Mercury Prize victory, Sampha’s album streams increased by 672% compared to a week earlier. Process also experienced a 1,554% overnight increase in streaming and downloads on Amazon Music

Back at the ceremony, as the confetti settled on tables strewn with empty bottles bubbly, Music Week sat down with Caius Pawson, founder of Sampha’s label, Young Turks, for a chat.

Here, Pawson discusses the possible impact of Sampha’s victory, the implications for Young Turks, which is part of the Beggars Group, and what the future holds for the South London soul singer…

Did you expect to win?

No. We’re over the moon. I thought J Hus was going to get it. We hoped. We were extremely excited when the nomination came, but until 10 minutes before they announce it you just cut that out of your brain. It’s too distracting.

What does the win mean for Young Turks?

Sampha’s been with us for over eight years. He started off as an intern, then was a producer and then a singer. All of the things that have happened in his life… The passing of his parents and how he overcame it, the record ended up taking eight years to make. It could have so easily never come out, it’s a phenomenal achievement, for him and his family, who are here tonight, and to be able to mark this moment in time is really important. This is so special. People can look back at this period and can have this moment.

What does it mean to win this as an indie label?

The Mercurys have always done a very good job of recognizing the work indies do. Awards like this are wonderful because it’s a huge team effort. There are 16 people at Young Turks, Katie O’Neil who A&Red it with me has been here for 10 years, so has Tic, who also A&Red it with me. It’s a way of unifying everyone and enjoying it. The reason we work in music, and furthermore in the independent sector, is because we love music, we love artists and we love being near them. When you can have all of the work you’ve done be focused by an award like this, it’s incredibly gratifying.

You signed him didn’t you?

Yes, we manage him as well. It’s a wonderful recognition of everything that everyone at the label and management company does, apart from that, it’s a laugh!

What happens after this for Sampha?

He’s got to make a great second record. I think that’s it, I don’t know how it will react in the marketplace or if it will increase sales but regardless, he’s just got to go away and find the space to be creative and make a wonderful second record, and then he’ll be alright.

What is it about this album that’s so special?

Early on, Sampha was doing a lot of collaborations and co-writes and he was always phenomenally talented, he brought special energy to anyone he worked with. But he really struggled to express who he was as a person and the record is a testament of his character. Being able to hear that is amazing. He had to teach himself how to produce to make the album he wanted to make, and that’s an incredible thing.

What did Young Turks do to facilitate him making it?

We gave him space and the right amount of time. When he needed longer periods being alone, we left him alone, when he needed that little push we came in and sped it up. We built a studio with him at Young Turks in Hackney, anything he needed… With someone like Sampha where it all comes from him, he leads, you follow and you just don’t fuck up.

Does this change your ambitions for him as an artist?

What he wants to do next is what we’ll do next. I have no idea. The man is a complete enigma. I wish I could say what the sound of the second record will be… whatever happens, if he makes an instrumental record or a vocal record, electronic or with a band, it will be whatever he needs to do. Pontificating on it is slightly pointless.

What can the album do now?

If it connects with more people, that would be a wonderful thing. I hope so. I love the Mercurys, when I was younger, I’d buy all the Mercury records. I love coming to this awards, this year was better than ever. I loved seeing Skepta, and any awards show that has Stormzy, Sampha, J Hus, and The xx playing is phenomenal in my book. I hope this has a huge effect for Sampha, I hope it does very well for the Mercurys and that down the line we can keep coming to this awards show and they can keep doing the great work they do breaking bands.

Music Week reported on the sales boost delivered to nominated acts in the run up to last week’s ceremony, revisit that piece here.