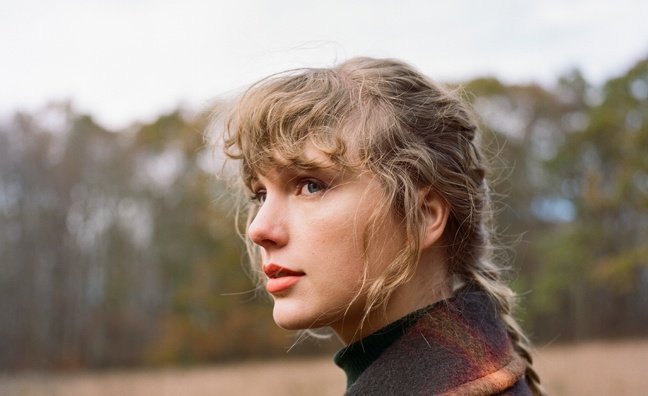 Well, we can only hope you’ve been more productive since. Because first thing this morning, Swift dropped another indie-folk masterpiece with a title ending in ‘ore’ – the new Folklore sequel Evermore – and you know what? It’s another masterpiece.

Not content with saving summer and autumn, Swift is now here to rescue winter as well, with an album perfect for a season that, this year more than any other, will largely consist of staring wistfully out of windows at inclement weather.

It continues to mine the rich vein of authentic, acoustic music that she unearthed on Folklore (a record that has only been enhanced in the months that followed its release), again working with The National’s Aaron Dessner (the whole band also get a feature credit this time on Coney Island), Bon Iver and Jack Antonoff, and also drafting in alternative stalwarts Haim and Marcus Mumford.

In her notes, Swift says that, “to put it plainly, we just couldn’t stop writing songs” so they decided to “travel further into the forest of the music”. But if you were expecting Evermore to be some Folklore offcuts, you don’t know Taylor Swift.

The songwriting is as top-notch as ever, the musicianship as beautifully crafted, the lyrics possibly the greatest she has ever penned. “I’ll come back stronger than a ‘90s trend”… “We were like the mall before the internet/It was the one place to be”… Every song drips with so many pithy one-liners you feel Swift could probably single-handedly replace the writers’ room on most hit TV shows.

But, while clearly still enjoying the character studies that helped make Folklore such a winning departure from her usual confessional oeuvre, Swift also knows her way around real emotion like no other contemporary hitmaker. On Marjorie – a song about her late grandmother – she sings, heartbreakingly: “I should have asked you questions/I should have asked you how to be/Should’ve kept every grocery store receipt/’Cause every scrap of you would be taken from me”. You don't get that from anyone else.

And, having written many a song about leaving her smalltown/smalltime past behind her, Dorothea sees her writing from the perspective of those left behind by the hometown superstar. While Tis The Damn Season perfectly captures the home-for-the-holidays mix of fuzzy nostalgia and lingering regrets than anyone forced to decamp to their childhood bedroom during the festive lockdown relaxation period is likely to be well-acquainted with before New Year rolls around.

But there’s also plenty of fire. No Body No Crime is an old school country revenge blockbuster the like of which Nashville hasn’t seen in a long, long time, while Cowboy Like Me (featuring Mumford) also plays the Americana cards to devastating effect. Meanwhile, Closure’s unalloyed fury (“I’m fine with my spite”) with an detente-seeking ex could almost have stepped off Reputation, were its instrumentation not still in the woodshed.

It seems notable that – as Swift’s dispute with Scott Borchetta and Scooter Braun over the sale of her back catalogue (now owned by Shamrock) rumbles on – Swift’s new home, Republic, already has half as many Swift records on their books as her former label. At this rate of productivity, who would bet against her having a full set of re-records ready to go by the time spring rides into town in need of Swift’s specialty season-saving skills?

The one question Evemore doesn’t answer is whether this is Swift’s life now. Will she stay in the woods making indie records that are much cooler than anyone else’s? Or will she return triumphant to her stadium-conquering pop stance when things get back to the old normal?

Either way, pop's greatest star shines ever brighter on Evermore. Whatever your festive lockdown plans, it’s time to get off the sofa and get involved...