International Charts Analysis: Backstreet Boys charge out of the blocks 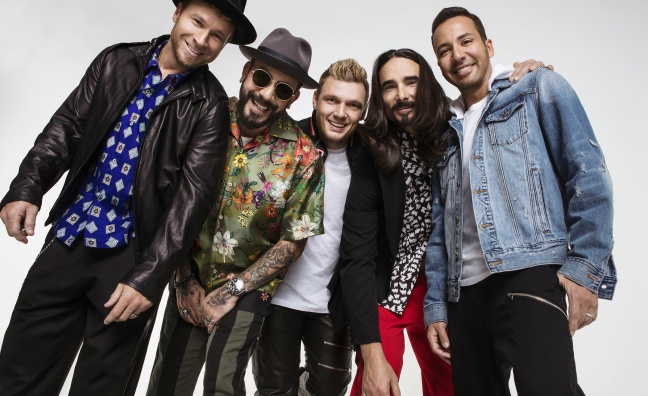 Turning back the years, Backstreet Boys’ ninth studio album DNA raced to No.1 on iTunes in 25 countries within hours of its release last Friday. We won’t know for a week or two how that translates into official chart action but coming six years after their last album and 23 years after their eponymous debut, it is hard to deny the tenacity of the former boyband heart-throbs.

Back in the world of what is, rather than what might be, veteran British rock quintet Thunder are pushing 60 and have been in existence as a band for half that time – reason enough to break out their celebratory album, Please Remain Seated, which debuts at No.8 in their UK homeland, giving them a run of three consecutive Top 10 albums for the first time. It also opens at No.44 in Germany and No.183 in Wallonia.

A part-time resident of Germany since 2006, British singer/songwriter Joe Jackson equals his highest chart position in that country with new album Fool debuting at No.11, thus equalling the peak of his 1982 set Night And Day. Fool’s release comes 40 years after 64 year old Jackson’s debut set, Look Sharp!, and also opens at No.13 in The Netherlands, No.15 in Flanders and No.110 in Wallonia.

James Blake scores the highest charting album of his career in The UK, where the 30 year old Londoner’s fourth studio set, Assume Form, debuts at No.6. It also opens at No.4 in Flanders, No.17 in The Netherlands, No.18 in Ireland, No.21 in New Zealand, Norway and Sweden, No.27 in Germany, No.89 in Italy and No.97 in Wallonia.

Rapper Future is a shoe-in to secure his sixth No.1 in The USA with his new album, Future Hndrxx Presents: The Wizrd and the album has already debuted at No.7 in The Netherlands, No.16 in The UK, No.18 in Norway, No.21 in Flanders, No.26 in New Zealand, No.38 in Germany, No.39 in Ireland and Sweden, No.60 in Wallonia and No.91 in Italy. The album’s US coronation will make it the seventh consecutive No.1 rap album there, in a sequence that also includes Astroworld by Travis Scott, Championships by Meek Mill, Skins by Xxxtentacion, Dying To Live by Kodak Black, I Am > I Was by 21 Savage and current topper Hoodie SZN by A Boogie Wit Da Hoodie.

Soundtrack shenanigans: The Motion Picture Cast Recording of The Greatest Showman continues atop the chart in The UK (for the 28th time) and Ireland (the 20th time); while Queen’s soundtrack to the Freddie Mercury biopic Bohemian Rhapsody is still No.1 in Australia and the Czech Republic, and Lady Gaga and Bradley Cooper’s A Star Is Born holds pole position in Denmark, New Zealand and Switzerland.