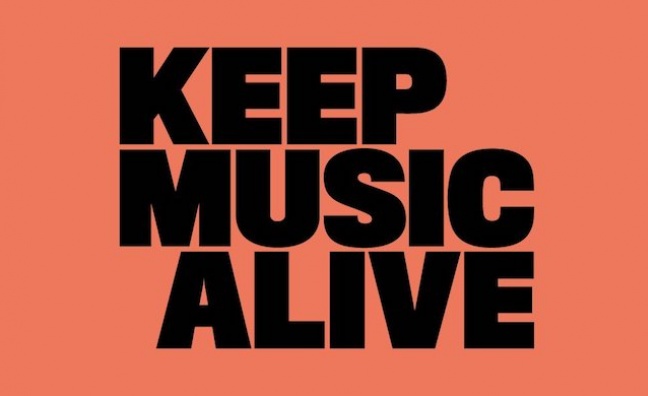 The Ivors Academy and the Musicians’ Union have joined forces for the Keep Music Alive campaign.

Covid-19 has hit songwriters, musicians and composers hard. The campaign is in response to gigs and commissions being cancelled, festivals and performances being postponed, and recording studios closed.

Since early March, over 20,000 applications have been received to music industry hardship funds. The two trade body’s said the crisis has highlighted concerns about streaming royalties.

Musicians and music creators have taken to Twitter, using the hashtags #BrokenRecord and #FixStreaming.

MU members have reported over £21 million of lost income since the Covid-19 lockdown came into force. Members of The Ivors Academy anticipate a loss of £25,000 per person over a six-month period. One in five respondents to an MU survey said they were considering leaving music altogether.

The Keep Music Alive campaign calls for industry stakeholders to come together to agree an equitable, sustainable and transparent model for royalty distribution in the streaming era.

As a first step, the two organisations have set up a petition calling on government to urgently undertake a review of streaming to ensure that the music ecosystem is transparent and fair.

Graham Davies, CEO of the Ivors Academy, said:“This is a defining moment for the music industry. Music creators are clear that the industry must change. The current models are broken. It is wrong for a few corporations to make billions from streaming while thousands of creators seek hardship support as their livelihoods evaporate. We are joining forces with the Musicians’ Union to make a powerful statement that change is coming. We encourage everyone who wants to see positive change, that builds a strong and sustainable industry for all, to join our campaign and sign the petition. We must keep music alive.”

Naomi Pohl, deputy general secretary of the MU, said:“Musicians should not be so dependent on their income from gigging and music teaching that when it falls away they are literally unable to pay their bills within weeks. The recorded music industry must play its part in shoring up the individuals on whose talent and creativity it so heavily relies. We have been asking for a fairer deal on streaming for years and it is long overdue. Our members can no longer accept the record labels taking the biggest share of income. We have to fix streaming now.”

Crispin Hunt, Chair of the Ivors Academy, said:“Many in and outside the industry are not aware of the plight of most songwriters and composers. If people knew how little of the money they pay for music actually goes to the music creators they would be shocked. Donations are essential at this time because the hardship is real. But why are songwriters and composers being given donations when others make billions on their creativity? We cannot go back to the old, broken industry when the immediate crisis is over. It’s time to create something that works for everyone.”