Making waves: The five stars of The Great Escape 2017 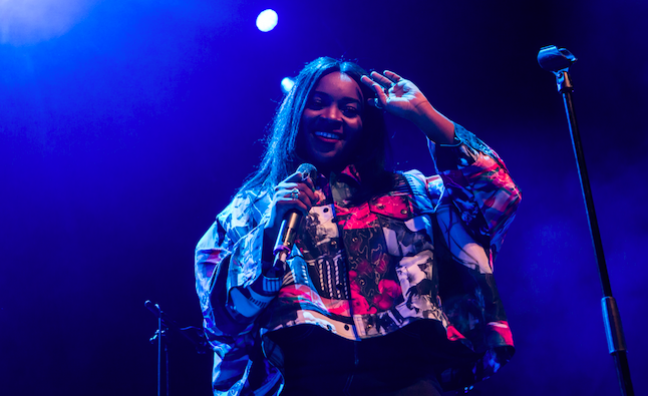 On Thursday afternoon, lashing, relentless rain seemed to soak every inch of Brighton. It feels like a lifetime ago now, but then, the blur that is the three days and nights of The Great Escape has a habit of skewing time. Over 480 artists played in the seaside town during the festival, and while it was – as always – impossible to catch everyone we wanted, here are five stars of TGE 2017.

. @4AD_Official's @AldousHarding closing out the first night of #TGE17 at Paganini Ballroom. You could hear a pin drop pic.twitter.com/QXULVX7H7X

Judging by the frequent ‘Shh-ing’, a few people near the back of the Paganini Ballroom seem to have a problem with the beery chatter by the bar as Aldous Harding closes out night one of The Great Escape. They should’ve made their way closer to the front, where the 4AD-signed New Zealand singer’s hypnotic stage presence is overwhelming. Backed on guitar and keyboard by H Hawkline, Harding sits in all white, cradling a guitar from which she summons unsettling melody after unsettling melody. During What If Birds Aren’t Singing They’re Screaming and a standout Horizon, her eyes roll back their sockets and her face contorts. Harding’s craft is that of a witch, and this feels like a séance.

The next evening, on a bill that also includes a theatrical tilt from the vampiric HMLTD and The Charlatans, Dead Pretties stand apart. They combine the intensity of the former and the everyman appeal of the latter, dressing it all up in a dirty, melodic racket that recalls The Stranglers, Blur, The Libertines and Madness (if only because singer Jacob Slater at times adopts the role of a smacked out Suggs). Their songs, like emphatic debut single Social Experiment, for example, stick in the mind and Slater’s flailing limbs and wild eyes help ram them down the crowd’s throat. Their fellow south London bands The Honey Has, Childhood, Goat Girl and Sorry are all down at TGE too, showing there’s something real brewing south of the river.

A chintzy, cavernous-feeling pub near the end of the pier, Horatio’s is one of the best TGE venues. Now renowned for boisterous gigs and festival debuts from the likes of Milk Music (whose 2012 show still prompts misty-eyed posturing from anyone who saw it), it’s the perfect place for The Magic Gang. At their best, the Brighton-based four-piece play their indie-pop choruses as if they’re about to fall apart, making for a ragged, rickety spectacle. Despite the fact the bar calls last orders before they come on and the down-the-road distraction of Youth Of The Apocalypse (the band featuring Klaxons’ Jamie Reynolds and members of Gorlliaz, whose set leads a lot of people to mistakenly think Damon Albarn has turned up) that’s exactly what we get here. One guy is desperate to crowdsurf and just about manages it. For everyone else the irresistible pull of the band’s plump, juicy choruses and boyish harmonies is enough.

The winner of the BBC Sound Poll 2017’s presence on the bill has gone somewhat unheralded in the build up to this Saturday night show, with the likes of Stefflon Don and Rag’N’Bone Man seeming to grab more industry attention. Whatever the reason, the Catford singer’s pristine combination of smoothness and fire is compelling, and this is one of TGE’s most powerful shows. Blk’s vocal display during Empress is flawless, and by the time we get to closer My Hood, the Dome is swamped in warm, emotive R&B, lent a hard edge by the occasional rapped verse. This performance raises Ray Blk above and beyond, hype or no hype.

Speaking of which, the minutes before Rag’N’Bone Man’s headline performance creak heavily under the weight of expectation. This soul of this festival isn't necessarily in these big showcases, but it’s a packed Dome, and Music Week is crammed into the circle seats, almost within touching distance of the stage. “Rory! Oi Rory!” shouts the guy next to us who, it turns out, is one of the blues singer’s best mates, having grown up together in Uckfield. Rory Graham’s hometown is just up the road from here and, as someone says on the way in, “The whole of Uckfield’s here!” Between songs, our new companion regales us with stories of the germination of Graham’s No.1 debut album, Human, and the years he spent gigging around Brighton before signing to Columbia. Meanwhile, the rest of the crowd go potty before, during and after every song, screaming every time Graham says ‘Thank you’ or swigs from his pint glass. The love in the room makes every song feel massive, Skin in particular. If this is how he makes people feel, Graham will have no trouble scaling the charts again.

"When you come out, you really come out don't you?" @RagNBoneManUK chats up his crowd, which is fairly up for it #TGE17 pic.twitter.com/ypkENeca7V