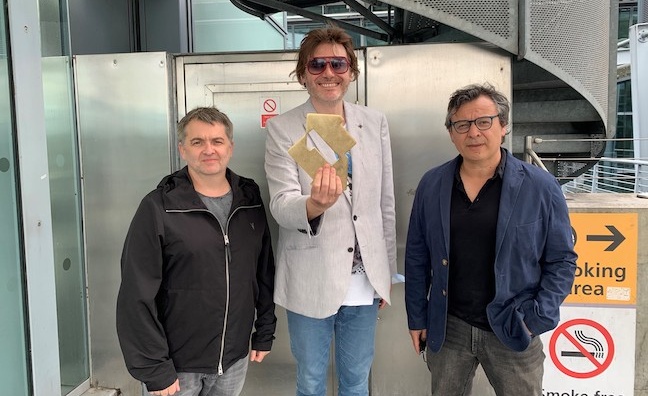 Manic Street Preachers have secured their first No.1 album in 23 years following a tense chart battle with Steps.

The Manics' 14th studio LP, The Ultra Vivid Lament (Columbia), led the way from the start, but saw its advantage over Steps' What The Future Holds - Pt 2 (BMG) cut to just 330 copies by the time of final midweek update on Thursday. However, a late surge saw the Welsh band claim the spoils by 27,345 sales to 25,285, according to the Official Charts Company.

The Ultra Vivid Lament becomes the Manics' second chart-topping LP and their first since 1998's BRIT Award-winning This Is My Truth Tell Me Yours (1,065,493 sales, OCC) when, ironically, they also beat Steps' Step One to the summit.

Celebrating the news, Manic Street Preachers told OfficialCharts.com: “It's amazing to be back at No.1 after 23 years - it was a titanic chart battle and we are absolutely over the moon. Thanks to all our fans, supporters and Sony for keeping the faith.”

A total of 24,881 (91%) of the Manics’ chart sales were physical, including 6,300 copies on vinyl, meaning it also took the top spot on the Official Vinyl Albums Chart.

The Manics have been with Sony for 30 years, having been signed by current Sony Music Entertainment boss Rob Stringer, who remains a close cohort.

"This is not a hobby or a distraction even after all these years and their attention to the recording process today is equal to when they were a young upcoming band," Stringer told Music Week in 2018. "Some of the working class values that they have focused on in their lyrics over the years also apply to their own work ethic. Also, most bands fall out because of either creative or personal or business pressures or all three and remarkably the Manics are joined at the hip still despite a journey that has certainly had its share of turmoil."