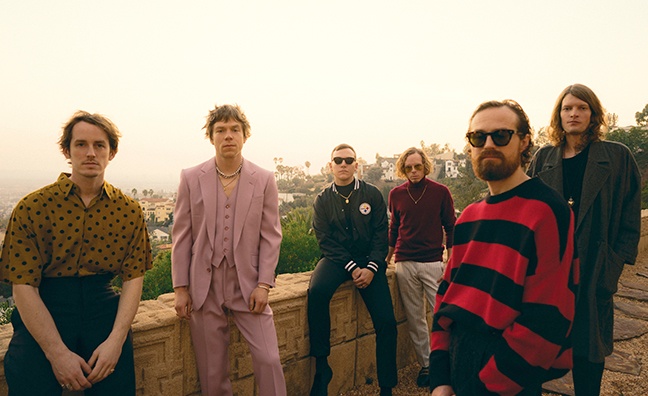 Peter Mensch has opened up about his plan to turn Cage The Elephant into a rock band able to have a career like Red Hot Chili Peppers or Metallica.

Ahead of new Cage The Elephant album Social Cues, Q Prime co-founder and rock veteran Mensch is interviewed alongside frontman Matt Shultz and Columbia co-MD Manish Arora in the new edition of Music Week, out now.

Mensch’s relationship with the band began in the wake of their self-titled debut album, released via Relentless in 2008.

Shultz, who went through a divorce while making Social Cues, his band’s fifth album, told Music Week that the record “saved my physical life”.

The album features Beck and was produced by John Hill, who was behind Portugal The Man’s hit Feel It Still, which has 1,354,754 sales to date, according to the Official Charts Company. Cage The Elephant’s biggest single so far is 2008’s No Rest For The Wicked (352,736).

“Cage The Elephant have always been a band who have believed in communicating the power of guitar music in all its myriad forms, but never slavishly so, or by sticking to the rules,” Arora told Music Week. “They’ve succeeded by always putting great songwriting first, and I’m pleased to say Social Cues is stuffed full with brutally personal guitar songs that stand up with, and surpass their best to date.

Leading Columbia executives including president Ferdy Unger-Hamilton were present, alongside Mensch and Shultz, at a recent playback event in London. The singer introduced tracks from Social Cues, which is released on April 19.

Here, we present Music Week’s Q&A with Mensch, in which he tackled rock’s streaming problem, the difficulties of breaking through and more.

How has your relationship with Cage The Elephant evolved?

“The interesting story of the first album is that they were signed by a UK company before anywhere else and they’re from Bowling Green, Kentucky. An A&R guy named Michael Goldstone [Mom + Pop] heard the first record and it had these songs, Back Against The Wall, In One Ear… he said it was amazing. We saw Matt play a show where he jumped into the audience and had himself carried all the way to the front of house. That was standard procedure. We went, ‘Fuck, this guy’s a star’. We only manage one other band where the lead singer doesn’t play guitar. My party joke to people who know my roster would be, ‘Name the only act under the age of 40 where the lead singer doesn’t play guitar’ and no one knows. Anthony Keidis does, he’s the only one. All I want to do is find lead singer-fronted rock bands, they’re a dying breed. Matt Shultz is my Mick Jagger. As a lead singer he can do things that you can’t do if you’re playing guitar."

The new album is very emotional…

“Matt’s a complicated guy. He wears his emotions right there. I don’t ask him why he writes his lyrics, frankly I just hope he can. The sad thing about lyricists is they have to experience pain to write, either personal or worldview. Matt feels it all.”

How excited are you about the record?

“Really excited. I only manage rock bands and they’re among the best I manage in terms of live performance. I want all of my bands to be as big as they can be worldwide, it kills me that Cage The Elephant, after five albums, are almost starting from scratch in Europe, they really want to be successful everywhere. I think this is the record to do it. We’ll have to see how the radio airplay goes, standard stuff, rock bands aren’t big streaming acts, we’re not pop acts. When rock bands have pop hits it’s like, ‘What was that? That was an accident!’ We’ll see if we can get a combination of enough airplay and critical acclaim to push the band above a level where they can have a career like a Red Hot Chilli Peppers or a Metallica.”

How did you see Portugal The Man’s success with Feel It Still?

“The question for them is, ‘Can they do it again?’ It’s like climbing Mount Everest, you can get to 17,000 feet, but if you don’t get to 19,000 you’re stuck. We have to get to 17, 19, 21, 23,000… We have to go up the food chain, that’s all we’re focused on. They’re a radio-driven band, I don’t think bands that are great live and don’t have radio impact will get big enough in enough time to be able to draw enough people. Unlike an English band, we can’t roll out of the doors and play shows here, it’s a process. Six band members, crew members, it’s expensive, you have to have some kind of critical mass."

What’s most special about this band?

Subscribers can read the full Cage The Elephant interview in the new edition of Music Week, out now. Click here to read it online.