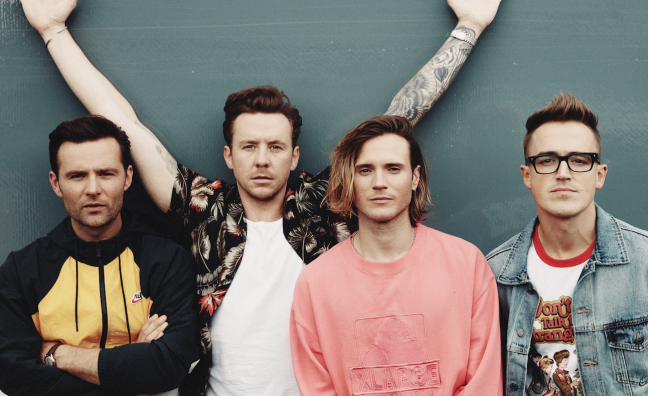 So this is Happiness! Ten years after their last studio album, McFly have made their long-awaited return with a brand new record, Young Dumb Thrills released via BMG last Friday (November 13).

It’s been a decade of recording albums, ditching them, falling out and making up with each other. And let’s not forget that surprise McBusted record. But now they say they’re stronger than ever as they return with a record full of euphoric pop bangers, a pop-punk tribute to life on stage that puts McFly’s essential stamp on love songs.

In the weeks running up to its release, Tom Fletcher, Danny Jones, Harry Judd and Dougie Poynter spoke to Music Week via Zoom to talk about the album that brought them all together again.

How does it feel to be back? Your fans have been waiting 10 years for your next album.

Danny Jones: "It feels so right! [laughs] It's easy to answer. I think back to what we were like without it, because it's something that felt completely weird and wrong. We've been in this band since I was 17-years-old, and it's hard when you don't have something for those couple of years that you've had in your life every hour of the day, every minute. It was a strange feeling. But to be able to do it again and get over what we went through; it just really feels amazing."

Tom Fletcher: "Danny's right. It's easy to talk about how you feel when it wasn't there. It's a bit like that cliché of, you don't know how good something is until it's gone. It's a bit like in Back To The Future II when Marty goes back to ’85 but everything's wrong! It was like that, you feel yourself starting to fade away into nothingness."

Why did you feel like now was the right time for a new McFly record?

Harry Judd: "Being a band is about friendship, and it’s about creative processes and there's business elements to it. It's never an easy thing. Things bubble and that kind of led to a break. On top of that people were going through some really difficult personal things. And so lots of these barriers had to be broken down before the band could actually get back together. But the reason we felt like now's the right time to do an album was because now was the time that we were ready to make the album. It was a painful wait for us. But it was the right thing to do to wait. If we'd have rushed it and forced it, it wouldn't have worked, we were all in a really good place, in a happy place. Our philosophy going into it was, let's have fun, and not overthink it, and make the album that we want to make and be really open to each other's ideas. And it worked. We look back on those two months of making the album with really happy memories. And that's what being in a band is about, it's about hanging out with each other and having fun and creating those memories. And that is forever an amazing thing for us to look back on Young Dumb Thrills and be like, that was such an awesome album, because we had such a great time."

This album deals with serious themes of mental health and relationships, but you can really hear the fun you had writing these songs coming through in the sound.

TF: "The challenge of writing in this band is because McFly is perceived differently depending on whom you talk to. The general public might know McFly through Five Colours In Her Hair or All About You. To them that is what McFly is, it's kind of fun, uplifting pop music that is a little bit more disposable, for want of a better word. McFly to other people might be something that's far more emotional, like Too Close For Comfort or tracks where we talk about some slightly heavier subjects and but that is the heart of McFly to that person. For us that can be challenging, but also quite fun to know that we have different boxes we need to tick to get your quintessential McFly album. But that's something that this album definitely delivers on.

How did the collaborations with Rat Boy (Young Dumb Thrills), and Mark Hoppus (Growing Up) come about?

Dougie Poynter: "The Hoppus one came from a seed that actually he started a long time ago. I texted him and said, ‘I want to write a song today, what should I write about?’ And he said, ‘Write about the rush of going on stage’. And so I wrote the chorus to Growing Up. It was something we were playing around with in the studio. But we could never really finish the verses or anything. So we sent it over to him and he sent it back, he wrote the verses and I love it. I love that song for a lot of different reasons. Growing Up is a massive nod to Blink-182 and Damn It. It's about us growing up, and how awesome it is being on stage, and you don't have to grow up when you go on stage. You can still be a massive kid, but only because you're in a band. Young Dumb Thrills is a mixture of ideas that started with us four with the riff years ago and then we were playing around with it in the studio and I had an old chorus that I put in it. We really wanted a slurry kind of Tim Armstrong from Rancid verse, and Rat Boy [Jordan Cardy] is really good friends with him."

DJ: "It was great having Jordan there just in general for the process. Even the guitar riff on that, Jordan ended up playing it because I was playing it too well. It was like it needed to be shitter [laughs]."

DP: "That's always my excuse for bass playing [laughs] it's good that I'm a bit shit!"

TF: "Jason Perry, our producer on the album who is like an extended member of this band, he's been with us for years, and produced our favourite stuff as a band. He'd been working with Jordan on some stuff, and thought that he might be the kind of thing that we were missing in our writing set-up for this album. And he was bang on; it clicked with him straightaway."

How has it been being signed to BMG?

HJ: "It’s peace of mind. We've always struggled as a band to be like, this is the single and this is what it should be. But having a team of people behind you that believe in the band that totally loved the songs that they were hearing from the studio and actively wanted to sign us; that's enough to play to a band's ego [laughs]. We just really clicked with them. Having done it independently in the past, we're at a stage now where we're not in a position to have to be thinking about all of those things that an independent has to do. So it's been great. They've been a huge support."

This album is being released in the middle of a pandemic and one of the worst years for the music business, how do you feel about that?

HJ: "We had a rough plan, but we just had to go with it. We certainly didn't want to delay anything. Obviously it's been really, really terrible but we just try to look at the positives. We've had good support from certain people and we've got this great documentary [All About Us] on ITV."

DJ: "Here's the positives, at least we'll be able to know what songs they really like because we'll say, ‘Oh, look at that, that's streaming well!’" [laughs]

TF: "We've got a bad track record of recording albums and then not releasing them that we've been scarred by. We've probably recorded three full albums, maybe more, of songs that we never released. Always for a good reason, because we believe there was something else that got in the way that was better for our band to do instead. But we know the reality is that we will never come back to those songs once we've done that. And so the idea that we finally got back together and made this album that we were so happy with and then not putting it out, it just wasn't ever a question. We knew that we were going to put this album out this year. Everyone needs music and entertainment at the moment now more than ever."

* To read our recent Hitmakers on It's All About You, click here. To subscribe to Music Week and never miss a vital music biz story, click here.