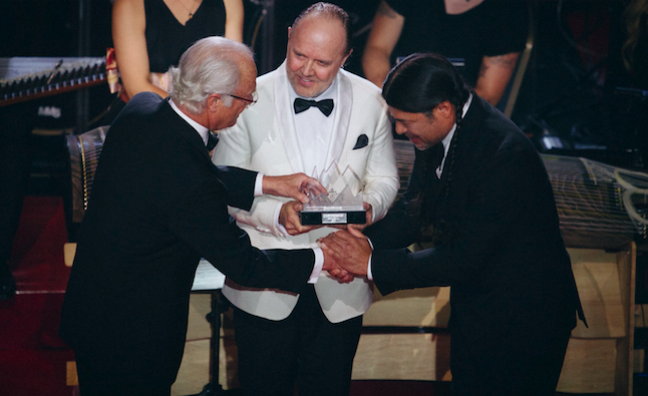 Metallica, Dr Ahmad Sarmast and The Afghanistan Institute of Music received their Polar Music Prizes from His Majesty King Carl XVI Gustav of Sweden on June 14 at the Grand Hotel, Stockholm.

Deep Purple got a standing ovation, and Roger Glover said: "In the early '80s, we were riding high ding a big festival in England...I heard this band backstage, they were on stage. I thought, umm, who is this. Metallica. I'd heard the name, didn't know anything about them. I went on the side of the stage to have a look and thought, yes, there's something happening here... Because the audience was singing every word they sang. And that's what impressed me, when you touch that many people with your music there is something special going on.... What a band."

The citation for Dr Sarmast and ANIM was read by Afghan singer and TV personality Aryana Sayeed who also performed on the nightThe Gala Ceremony and banquet was held at the Grand Hotel, Stockholm.

Special arrangements of the winners' music was performed by an array of artists, including Ghost, Candlemass, Loney, Deer, Loreen and Vargas & Lagola.

Metallica's Ulrich said in their acceptance speech: “First of all, I would like to say what an honour and a privilege it is to share this award with Dr Ahmad Sarmast, who through his tireless and selfless endeavours is showing the world how connecting people through music can be both a transformative and a healing experience.

"Who would have thought, when Metallica started this musical journey 37 years ago, that one day we would be standing in front of both musical royalty and actual royalty, accepting one of the most prestigious prizes that can be bestowed upon musicians.

"The type of music that we play was not supposed to be acknowledged or embraced by the mainstream, the media, or even large audiences. In 1981 when this band formed, I just wanted to play music in a collective setting and feel like I belonged to something bigger than myself.

"From the beginning, we always felt like outsiders. We always felt like somehow we were not good enough, not cool enough to be accepted by a general music audience. We found strength and solace in the little bubble we occupied way out in left field.

"The an unexpected thing happened. The mainstream audience began moving closer and closer to the area where the musically disenfranchised like ourselves were hovering. And about 10/15 years later, we found ourselves right in the middle of that very mainstream which we had felt so vengefully ostracised from.

"Receiving this prize solidifies the idea that no matter how alienated you feel, connecting to other people through music is not only possible but can be outright inspirational and life changing."

"And finally, while this award acknowledges Metallica's achievements of the past 37 years, as we stand here in this glorious moment, may the Danish kid in me shout out to the world "LOOK MOM, WE'RE JUST GETTING STARTED..."

Dr Ahmad Sarmast said: “It is with great honour that I accept the Polar Music Prize, with you this evening. To join alongside the ranks of fellow laureates, from throughout the world, masters in their field, it gives me great pride to acknowledge Afghanistan’s music and musicians, who once thought they would never listen to or play music again, are today amongst these ranks. This is a reminder to us all — in our work as musicians, educators, and as leaders responsible for upholding the powerful and transformative gift of music, that we should never give up, no matter the challenges.

Sarmast continued: “ANIM is everyday protecting a child's right to learning music, promoting girls rights and gender equality, providing the rights of children to receive a fair and free education, and in reviving and safeguarding the rich cultural and musical traditions of our beloved and beautiful country, Afghanistan —so that today we may play brighter and bolder than ever before.”

Each Laureate receives prize money of one million Swedish Kronor. (approx. GB £90,000 / US $130,000). Metallica will donate their prize money, splitting between two charities – City Mission in Stockholm, a charity for the city’s homeless, and Metallica’s own charity Within My Hands, dedicated to creating sustainable communities by supporting workforce education, the fight against hunger and other critical local services.