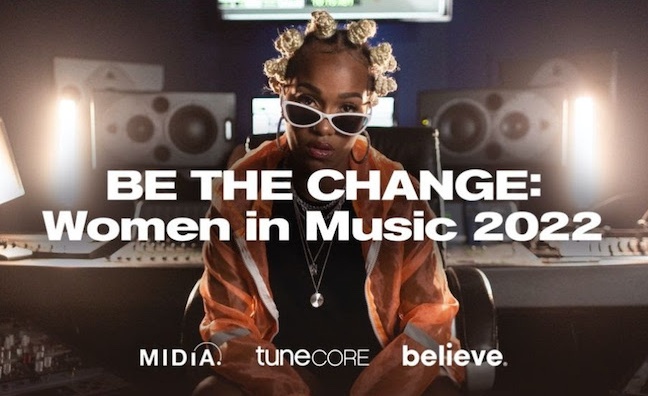 The second annual study for Be The Change, Women Making Music 2022, has launched today (February 18).

The survey is conducted by MIDiA Research and sponsored by TuneCore/Believe. The study will look at women and gender minority creators in the music industry, uncovering their challenges, experiences, inspirations and ambitions for the future.

This study follows the previous project, which launched in 2021. Drawing from firsthand accounts, as well as survey results, the report delved into the challenging journeys that many creators face, such as direct forms of discrimination, endemic issues of under-representation and unconscious bias, in addition to exploring issues that affect creators’ confidence.

Last year’s study revealed that some of the barriers that women face in the music industry are becoming more acknowledged thanks to the growing number of networks and industry groups. But there are still many challenges and obstacles, many of which remain misunderstood and unsolved.

Key findings from Be The Change 2021 include:

-    Gendered expectations have skewed recognition and reward in the music industry: of 401 female creators around the world, 81% think that it is harder for female artists to get recognition than male artists

-    Almost two-thirds of female creators identified sexual harassment or objectification as a key challenge, making it by far the most widely cited problem

-    Although the overall representation of women in society has increased over the past few decades, 84% of women still feel that there exists a perception that women are expected to take on the primary role of parenting duties.

-    To bring more female creators into the industry, women want changes to come from within organisations and from leaders across the music industry through diversity, policies and culture, with 42% stating this as a top three reason to encourage more women into the industry. Meanwhile, 38% of female creators want to see this organisational change underpinned by legislation

This year’s study will look to include the hardships faced by other gender identities, as well as the incremental changes caused by the pandemic. Through the help of numerous industry partners, such as Women in Music, Keychange/PRS Foundation, Music Business Association, Twitch, CD Baby, Songtrust, Ableton, Splice, MI Therapy, and others, the aim of this survey is to reach more creators on a global scale.

The survey for women and gender minority creators in the music industry is here.

Mark Mulligan, managing director at MIDiA Research, said: “Last year’s Be The Change report played a crucial role in putting numbers behind the industry dynamics that shape the experience of women in music. This year, we want to take things one step further, getting even more specific about what changes can be made, and identifying just how men can play roles as allies to help ensure that the dial really begins to be turned. We are proud to be working on this study again and look forward to hearing just what the industry has to say.”

Andreea Gleeson, CEO of TuneCore, said: “To create real change, each of us has to start with what we as individuals can control and be the change we want to see, hence the name of the study. When our daily behaviour in our personal lives encompasses inclusivity, and we bring those practices into our professional lives, that’s when we see meaningful change happen in the music industry. This study serves as the foundation for that change, and we are thrilled to sponsor such a meaningful project.”

Imogen Heap, in her foreword to the 2021 report, said: “... it took me 20 years to realise how much of an unknown force being a woman in this male-dominated industry had pulled against me. It’s so ingrained, I couldn’t see the wood for the trees. I didn’t know any different. That was all I’d ever known.

“We have a long way to go still before there is no more need for reports such as these. There are many incredibly talented people across the industry who come from diverse backgrounds and still remain the minority. It will take us all pulling together – every creator and every institution to show that bias is not acceptable, and that inclusivity and equality needs to form a core part of people’s values and beliefs in order to really drive positive change.”