'Our fans are really smart': Dan Smith talks the new Bastille album and the Doomsday Society 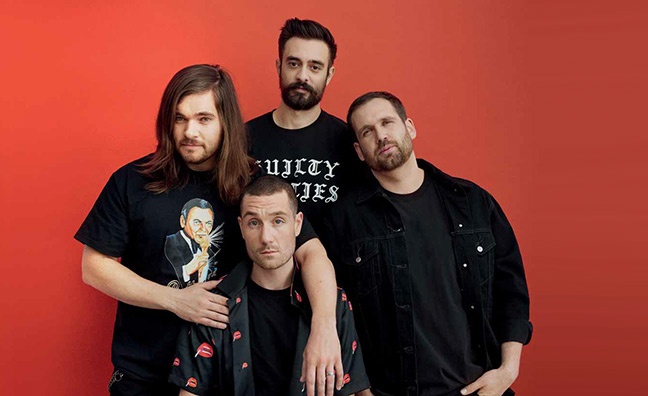 The record, which is released via Virgin EMI on June 14, is a concept album tracking the course of one night and is their first LP since 2016's Wild World.

“The genesis of [Doom Days] was a reaction to our last album,” said Smith, who stars on the cover of this week's issue. “Wild World was this sprawling, wonderful mess that had tried to react to 2016 and the strange changes that were happening in the world. I love that album, but it was fraught and confused. If the second album was like the red pill in The Matrix and choosing to confront the world and confront reality, this album would be the blue pill and choosing to live in ignorance, temporarily.

“We looked to the ’90s, which was before our time, but was pre-social media and smartphones – where people had experiences that happened once and went away because everything wasn’t being filmed on camera phones, Tweeted and Instagrammed. That’s what inspired the initial sound, but then the potential hollowness of making a record just about escapism started to emerge.

"I was interested in immersing myself in books and films that I loved about hedonism. I went back and re-read Dorian Gray and Fear And Loathing In Las Vegas, and watched films like Eyes Wide Shut. That definitely seeps into the album."

Another turning point came when the band reworked their hits with a live orchestra and choir for 2018’s acclaimed Reorchestrated tour of concert halls such as the Royal Albert Hall.

“We thought the album was finished at the beginning of summer last year and then we went on tour to do Reorchestrated," explained Smith. "That was an idea we’d had to take all of our songs, flip them on their heads and perform them with an orchestra and a gospel choir, just to find another way to invert people’s expectations of what we are.

"It was an amazing experience and that made us look back at the album and think about how we could make it better. The gospel sound seeped into the record and a bunch of the singers that were on the road with us ended up singing on it.”

Bastille will support its release with a run of nine “apocalyptic party” club nights away from the traditional UK touring circuit in towns such as Grimsby, Llandudno and Torquay, warming fans up with DJ sets before taking them through the narrative of the album, which they will play live from start to finish.

"We feel very lucky to still be able to make albums and I want to be releasing them in interesting and odd ways. This immersive experience is part of that," said Smith. "I wanted to make something that was challenging and hopefully exhilarating, and to really mark this album. Hopefully, it will mean something to a lot of people."

Smith, co-founder of record label Best Laid Plans and One Eyed Jack's recording studio, was full of praise for the band's dedicated fanbase.

"We have this online 'Doomday Society', which is us trying to create a place in reaction against all the negativity of the internet," he said. "Our fans are really smart: they challenge us and we want to challenge them and be engaging.

"We've been lucky to work with people who have helped put together award-winning campaigns for us and use digital technology to help expand the worlds of our albums because for us it's always been about trying to create this slightly surreal, odd world around our music. That comes from our love of film, cinema, art and creativity. If we didn't put as much care and thought into every little detail as possible – even if the vast majority of people aren't aware of it and it's only speaking to one small, hardcore corner of our fanbase – then I think it would be a shame."

Subscribers can click here to read the full interview with Smith from the latest issue of Music Week.