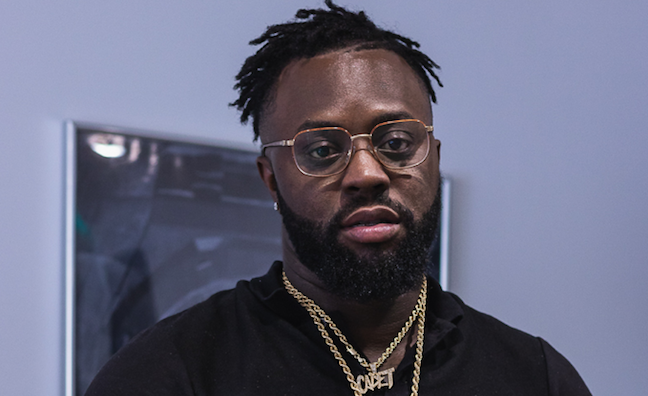 Star names including Stormzy, Krept And Konan and Ray Blk have paid tribute to Cadet following the news of his death early on Saturday morning (February 9).

A statement said:  "Blaine Cameron Johnson, 28, of London, died after the Toyota Prius he was travelling in was involved in a collision with a Vauxhall Combo van at 1.30am. He was pronounced dead at the scene."

Cadet signed a services deal with Absolute in 2016 and was represented by Primary Talent International.

Advice, a collaboration with Deno Driz, peaked at No.27 in September 2018 and has sold 249,801 copies to date, according to the Official Charts Company. The track has more than 19 million streams on Spotify, where Cadet has over 1m monthly listeners. He released 10-track project The Commitment 2 in 2017, via his own Underrated Legends imprint.

Fans and peers alike paid tribute at a gathering in London's Hyde Park over the weekend.

Scroll down for a selection of tributes:

My life will never be the same again. I love you and will forever miss you. I cant believe it. I am heartbroken. Rest in peace cuz. You finally started getting the recognition you deserved. Im so proud of you. My left lung. Im devestated and broken right now ???????? pic.twitter.com/125pWPMzO1

Blaine Abdul Johnson’s (Cadet) Mother letting us all know that at the end of the day the most important thing for us to do is to express ourselves. Thank you. #UnderratedLegend ???????? pic.twitter.com/JU5Wk0HI5J

REST IN ETERNAL POWER MY GUY ????@Callmecadet ???? i miss you more than you can imagine. pic.twitter.com/C2QZDdiLRJ

Hundreds of people out there today for Cadet, it was so special for such a special person. ????

Just tears at my heart, so courageous.

We shouldn't rely on the family to pay for this funeral guys, can we all band together and provide a the perfect send off for Cadet? https://t.co/UBS21CMpBF

So sad about Cadet, my thoughts are with his family. Rest in power bro ♥?

Cadet passing away shows you just how fragile life is, you can really go st any time.

Prayers to him and his family.

R.I.P Cadet. ????
Tomorrow is not promised that’s why
You should always try and appreciate those around and do all you can for them. Prayers out to his Family at this sad time.

I hope you can see all the love you’re getting right now. Tears have been in my eyes all morning fam! One of the coldest to ever do it. Real real clean heart. Our Underrated Legend. RIP Cadet my brother ???????????? pic.twitter.com/jkcXXmXu0Q

Show love to people while they’re alive!! Please please let’s not wait until someone passes to share love and give recognition ???????????????? RIP Cadet.

@Callmecadet my bro. You looked after man and made sure I was always good. We went silver, we had one of the biggest UK tracks of last year, you were too young and in your prime, we always have love for you. Long Live Blaine, #RIPCADET, The #UnderratedLegend became the legend ???? pic.twitter.com/F5waKcT7F0

Rest in peace Cadet. Thank you for the memories. Thank u for always keeping the same energy when we bump into each other. One of the most humble and modest people I’ve met. You and your talents will be deeply missed ???? RIP

RIP Cadet. Taken far too soon. Such a lovely energy to be around and a very talented artist. Prayers are with his friends and family members. ♥?

RIP Cadet. Our thoughts are with his family and friends ?? pic.twitter.com/peja1c36FA

Cant believe it...
I was on stage with him last week . Never seen a man so happy. Everything was working out for him.
This was gonna be his year. We were plottin on the best time to do an interview on his next single.
Rip Cadet ?????????? pic.twitter.com/Nwy65RUqbJ

Very sad to hear the news about Cadet’s passing. Rest in power ????

If it wasn’t for artists like Cadet & Novelist pushing the word about my studio & coming week after week, I’d never have been able to quit my job when I did. Things like this remind me to look back & really appreciate everything everyone has done for me no matter how big.

Just woken up looked at my timeline ???????????? proper genuine brudda cadet. condolences to his close friends and family.

I wish bro could see all the good things ppl are saying about him ????

Look at what everyone is saying about you, I proper don’t even know what to type this feels mad weird. I was gonna write a long speech about how I met you and what you’ve done for me but where does man start. Everyone loves you look at what everyone has to say about your heart and character. This guy ALWAYS, as in literally every single time I see him greets me with a “I love you lil bro”, the last few times we’ve seen each other that’s all we say, we haven’t even caught up, man just sees you and you say you know I love you lil bro and I say bro from early I love you. This guy has saved my arse when I was dead broke and made it a duty to let me know you’ve got my back, like that’s all you say and remind me. IThis man exudes love. I can’t even explain how clean hearted you are, look what you mean to everyone. No one will ever forget you big bro, words can’t do anything justice right now but rest in peace to the absolute REALEST and I can say that with my hand on my heart. Love you bro ????????????????

Waking up to the terrible news that Cadet has passed away. I can’t believe it. Such a talent, and a lovely guy, always smiling, infectious energy. My thoughts are with his family, and close friends at this time. ????????