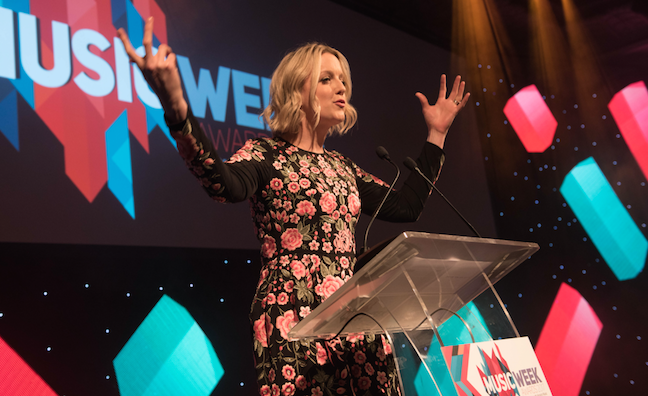 Music Week Awards host Lauren Laverne delivered an outstanding opening speech at last night’s gala ceremony, sharing stories of her own experiences of the biz during her time fronting ‘90s indie band Kenickie, whilst also hailing the music industry’s recent return to growth as cause for celebration and optimism.

The 2017 edition of the Music Week Awards was held on Wednesday night (April 5) in the glamourous environs of London’s Grosvenor House Hotel, as the music industry turned out in force for the most prestigious awards bash of the year.

There were inspiring words aplenty throughout the night, with Strat Award winner Sarah Stennett providing one of the show’s major highlights with her inspirational acceptance speech. A host of other winners also addressed an audience of music biz luminaries with words that stirred and entertained in equal measure, as you can see in our round up of the 10 best quotes on the night.

Yet it was our esteemed host Laverne who kicked off proceedings with a storming address that managed to combine Sir Patrick Moore, Stringfellows, Ed Sheeran and Steps, plus a whole host more to boot.

So, for those whose memories may be a little hazy in light of last night’s festivities, we’ve reproduced Laverne’s opening monologue in full below for your perusal. And you can also catch up on the night six biggest talking points here and the full list of winners here.

"What an honour it is to be hosting tonight. I’ve been working in this business since I was a teenager. In many ways the music industry was my gateway to adulthood. It was two weeks after my 18th birthday when I signed my first record deal. Back then - 20 years ago - I was a mere pop music padwan, awestruck by the magical and mysterious world my band mates and I were about to become a part of.

I fully expected the music industry experience to be like the opening titles to The Jetsons. I imagined I would be placed on a moving conveyor belt and that robot arms would deposit upon me new clothes, great hair, a glittery guitar...all the accoutrements of a pop star. In reality the experience was a lot like adulthood itself - not what I expected. Simultaneously better and worse and much, much weirder.

"My first inkling that this was going to be the case came shortly afterwards, when we were called upon to play a showcase gig at our record company's annual conference. The event was held in a large hotel on the outsikirts of Birmingham, which I presume was chosen so that if word of the expenses bacchanal that was to follow reached head office in London and someone was dispatched to put a stop to the shenanigans, there would be time to clean up before they arrived.

"I don’t want to imply that the industry was surfing a wave of hubris at the time but it is interesting to note that my band - a teenage indie punk troupe with an attitude problem, who couldn’t really play - were at the top of a bill which began with noted astronomer Sir Patrick Moore playing the xylophone and also included soul hero Alexander O’Neal (I can only imagine he had a flight to catch and was happy to go on first). Our audience included Blur, girl band Eternal and The Go Go’s own Belinda Carlisle. In the event our set was chaotic but went down reasonably well. After we played Blur got the drinks in (well the two friendly ones did). An A&R man we worked with was sacked for introducing his heavy-set employer to the stage with the line “And now, literally larger than life…”. Someone came up with the idea of commissioning 20,000 promotional biros that looked like blood-filled syringes to promote the upcoming Trainspotting soundtrack (they would never be sent out - as soon as they arrived everyone realised they were in bad taste - though I did give a box to my gran, who thought they were absolutely marvellous). The day after the gig a now-disgraced tabloid hack gave the event a great review. In short it was business as usual, at least the way people did it back then.

"Yes the '90s was a strange time to be a teenage girl in the music industry. In the course of our not particularly successful four year career we were interviewed for a TV show in Stringfellows (apparently this seemed like the logical place to put teenage girls. The upside was that we were taught the correct way to pour champagne. All over the tits. I’m joking - twist the bottle not the cork, and tip the glass as you pour. Thanks, Stringfellows). We supported the Ramones at their last ever British Show, at their request (pretty cool). Modelled sunglasses for a fashion item on GMTV (less cool). We worked at Abbey Road. Won John Peel’s Festive 50. Filmed a video on a speedboat and another at a race track. We went on Top of the Pops - which was still filmed next door to Eastenders - and almost got thrown off the show when someone found us in Dot Cotton’s Kitchen.

"We had a blast, we also made a living. All of us. From the bands to the roadies to our record company. Our publishers. The music mags who reviewed our stuff and the retailers who sold it. And just like I said at the beginning, things often didn’t work out the way any of us planned. Sometimes they worked out even better. I found a job that really suits me and took on a different role as a DJ. I’m now at BBC 6 Music, which reaches millions of people. My band’s road crew went on to tour with Coldplay. Our publisher became one of the leading authorities at the Universal music archive. One of our sound engineers who was always too handsome for life in a splitter van went on to produce a couple of records you might have heard of with a different teenage artist, called Adele…well done Paul Epworth.

"If we’d been trying to make it a decade later who knows whether it would have happened for any of us.

"But another decade on again, I feel more hopeful for musicians and for the people working with them. It’s amazing to see the way the music industry has adapted to the challenges of the digital landscape. 2016 saw the return to growth for the recorded music industry - fantastic news. We all know you guys were hit first and hardest by the digital revolution, but you are now paving the way for everyone else. Publishers, broadcasters and other media outlets are looking to the success of the live sector, the vinyl revival and Record Store Day, the focus on quality physical releases and - of course - curated streaming services and asking how they can replicate those stories in their companies.

"Of course 2016 will be remembered as the year we lost many of our heroes. Bowie, Prince, Leonard Cohen, George Michael, Prince Buster, Maurice White, Sharon Jones and many others.

"But there have been so many good things. Last year also saw grime finally gaining long-overdue recognition as the most vibrant and influential music genre in the UK. It saw Stormzy and Rag n Bone man become two of the country’s brightest stars. Drake clocked up the second-longest stint at No 1 - 15 weeks. The anti-secondary ticketing and touting campaigns which made the government take action at last. People who missed the age of the music video rejoiced when they realised that it had come again - with the one small difference that the video in question now had to involve an artist singing their song in a car with James Corden. And we witnessed the glorious returns to the pop firmament of OGs Rick Astley, Craig David and Steps. It’s probably worth noting that Ed Sheeran’s recent winning streak happened after the eligibility period for tonight’s awards, but if you want to place a bet on him winning every category next year, who am I to stop you?

"Yes, there is a lot to celebrate tonight and it’s a pleasure to be here to help you do it. Without further ado, on to tonight’s first award…"