Russell Watson on hitting wrong notes, the future of classical and why BMG are "the best label" 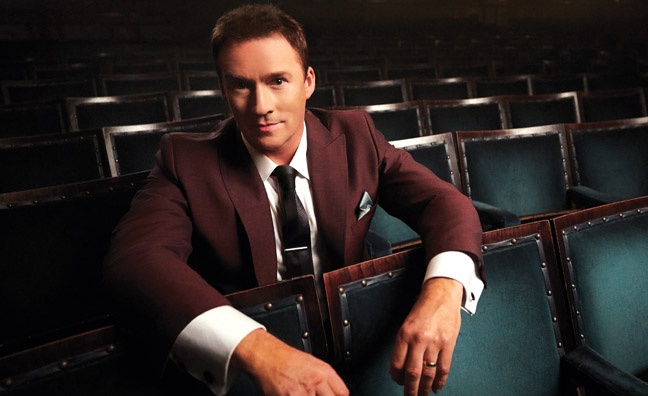 Russell Watson is having a busy month. A couple of weeks ago he marked the 20th anniversary of his debut record The Voice’s release with 20, his new Top 10 career retrospective collection. As if that wasn’t enough to be getting on with, last night (November 18) he signed up for the eye-ball munching delights of the new series of I’m A Celebrity… Get Me Out Of Here!

In the latest issue of Music Week, the best-selling tenor took on our Aftershow feature to detail his journey from playing gigs with two people in attendance to performing for the Pope, surviving two brain tumours, meeting Sir Alex Ferguson, and his colourful experience of singing on stage with Meat Loaf.

“Rock‘n’roll courses through his veins,” recalled Watson. “I walked into his dressing room and the first thing he said is, ‘ARE YOU READY TO ROCK!?’ And I replied, ‘Er, yes I am, Meat Loaf’. He went, ‘RUSSELL! TELL ME YOU’RE READY TO ROCK!’ So I was like, ‘Yeah!’ He said, ‘You wanna do some rock vocal scales? Get on your back!’ So, I’m lying on my back in his dressing room and he puts a half full glass of brandy on my chest and he says I need to do my vocal scales without spilling any of it. That was my first introduction!”

Here, in an unread extract of our Aftershow interview, Watson sheds more insight on his life and times in the music industry…

When you perform a song like, say, Nessun Dorma live, are you ever scared that when you open your mouth, the right notes are not going to come out?

“So, here's the thing, a lot of it, particularly when you’re touring, is muscle memory. It's a bit like doing an obstacle course. The more you go around the obstacle course, the more you'll find, not shortcuts, but easier ways to get over certain obstacles. Some of the classical arias are a little bit like an obstacle course, where you’re finding the easiest way around, but also finding the smoothest way around it as well so that you're not literally hammering it all the way through. The last time I was nervous was when I got a telephone call saying, ‘They want you to do Nessun Dorma on This Morning!’ I’m like, ‘What!? I can't sing Nessun Dorma at 9am!’ For the two days prior to it, all I was thinking about was, ‘Oh my God, I'm going to be singing Nessun Dorma live at 11 o'clock in the morning – I hope that I hit that top note and it’s not strained!' If you’re in a theatre and it's live, everything you do is millisecond to millisecond. So, somebody can be watching and you can maybe just slightly fluff or crack on the top note, but you pull it through, get it back in order again, or you’re just under with your tuning and you bring it back in. But when you're on national television live, where every single human being has an immediate opinion that they can post on Twitter? It’s a real added pressure. I remember back in the days when I first started in 2000, you'd go on television and everybody would have an opinion at home, but you'd never hear it. Now, everything you say is out there for everyone to comment on. It's a different world and, in some respects, it's scary. Say I go up to the top note on Nessun Dorma and I don't quite pitch it right, next thing I've got 100 people saying, ‘Oh my god, he was flat! Oh god, that was awful! Terrible! Vibrato was out of control!’ As an artist you can’t help but read the comments...”

Let’s rewind the clock. It’s 20 years since you released your debut The Voice – who were you are at that time as a fledgling artist?

“I had just come out of playing North West working men's clubs. I'd had a considerable amount of vocal coaching, but I wasn't trained at the Royal College Of Music in London or anything like that. I just had a lot of vocal coaching, which I had self-funded myself. When I first walked into AIR studios and the Royal Philharmonic Orchestra are sat there, with Nick Ingman at the baton. I remember walking in there and feeling really quite intimidated by the whole affair, and actually, in some respects, thinking, ‘God, I hope I don't get found out!’ But having said that, I think that first record metamorphosised into something really special because of how I felt intimidated by the whole procedure, I felt like I wasn't worthy. I think that record had a real innocence and a real essence about it that actually said, ‘I'm here, I'm loving it, but I'm not quite certain whether I'm getting it all right yet.’ I think that was one of the catalysts why that first record was so successful.”

“I got often told ‘Forget about it’ and that the classical world was a closed shop, forget it don't go near. If I had a pound for every time I was told that... It was like, ‘There’s no way, this will never happen, it’s a completely different world to where you come from, it is not going to happen. Forget it.’ And it happened! From singing with Sir Cliff Richard when he did his massive tour to all the sporting events from the rugby union World Cup at Twickenham to the rugby league Super Cup final, to singing at the Champions League Cup final for Manchester United when they won the treble. All these amazing things all catalysed at the same time and helped. Ten years in the clubs and then also literally the Daily Mirror said, ‘overnight success’. It did in some respects happen overnight, but once I got there, there was no way I was going back.”

The Voice sold a staggering 762,000 copies, but where do you see your genre now. What do you think the future is for classical music?

“I don't know, if I'm being totally honest, I don't know where the future of music in general lies, because we all know what's happening with regards to physical copies. It's a tough world out there, record companies are working on much tighter budgets. When I made my first album, 600 grand was a drop in the ocean. Now, you’re lucky if you got a budget of 60 grand to make a record, and yet they want the same quality. Sometimes that's not easy to attain. We’ve done really well on this record. The budget for this record was not particularly high, but we've delivered a great product because we've adapted to the times and that's what's happened over the last 10 years: everyone's had to find ways of adapting to the climate within the music industry.”

You do seem to be very smitten with your label BMG…

“BMG, in my opinion, are definitely the best record label there is. They’re brilliant. Their focus is amazing. It's like, rather than a massive faceless organisation, and I'm not mentioning any names because that's not fair, but there's a real sense of camaraderie, a real sense of it being a team. They work so hard for you and there's an artist/label connection as well that I've not had for a very, very long time. It sounds like a cliche, but it's like the old days where you don't feel like you're talking to a set of accountants who are just constantly talking about the top and bottom line. They actually care about the artists, they care about the music. The amount of calls that I get from Jamie Nelson [VP A&R, BMG] just ringing up saying ‘Is everything okay, Russ? Are you happy? Is everything okay? Feeling good about things?’ It's a great feeling when you get that kind of relationship with a record label because it makes you feel like you're all in it together. Gemma [Reilly-Hammond, marketing VP, BMG] and the team, they're just really tenacious, the attention to detail is second to none. And it's a great experience. I mean, obviously, it's not quite the same if you only sell two or three records! The great thing about BMG as well, from my perspective, is it feels like 20 is a classical record but being promoted and sold in the way that you would sell a big pop record. And that's the way forward for classical. You have to sell them like it’s a pop record. It has to be mainstream.”

Finally, you said it was a hugely emotional experience singing at Old Trafford, but what was it like performing at the Champions League final?

“I got a call the day after we'd won the Premier League title, and it was Ken Marin, who was one of two club secretaries. He rang up and said, ‘Oh, hello, Russell, I'm calling on behalf of the manager. You went down so well over the weekend, the manager’s requested that we have you back like a lucky charm – I was wondering if you'd come out to the Champions League Final and represent Manchester United for the cup final at the Nou Camp stadium?' I said [high pitch voice] ‘I’ll just check my diary!’ So off I toddled to the Nou Camp stadium! My God.”