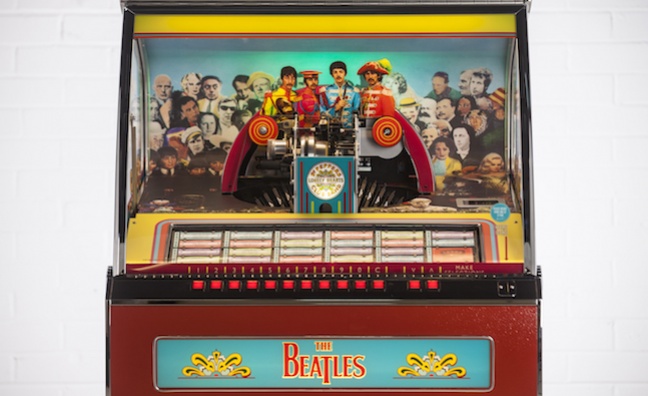 Following the success of the Sgt Pepper’s Lonely Hearts Club Band reissue, the album’s anniversary is being marked with a limited edition vinyl-playing jukebox.

Jingle Games Ltd, which designs and markets branded jukeboxes and amusement machines, is producing the jukebox under exclusive licence from Apple Corps.

The jukebox, which features artwork from the iconic album cover, holds 70 7” singles and is capable of playing both A and B sides, as well as incorporating a Bluetooth receiver to stream digital music wirelessly from any compatible device.

“Eight years on from our last collaboration, we are absolutely delighted to be working once again with Apple Corps Ltd to create what will be our sixth Beatles-themed jukebox,” said Harry Gibson of Jingle Games. “As a lifelong fan of their music it’s been a privilege to have been given the opportunity to create such a special and unique Beatles’ product.”

Jingle Games have been involved with the design and international sales of The Beatles jukeboxes since the first Yellow Submarine Wurlitzer-style jukebox was designed and launched in 2001 by their associate company Lordsvale.

The Sgt Pepper’s Jukebox will be exclusively manufactured in the UK by Sound Leisure. It retails at £8,995.

The album reissue project was overseen by producer Giles Martin.