Tears For Fears talk reinvention, rejuvenation and The Tipping Point 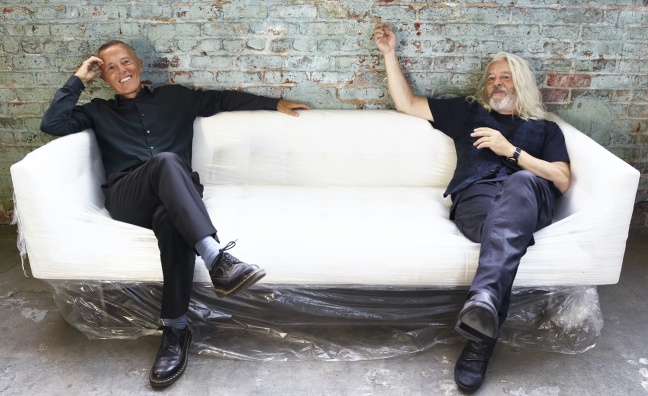 Tears For Fears are entering into a new era with their comeback album The Tipping Point, Roland Orzabal has told Music Week.

Orzabal and his fellow co-founder Curt Smith have just released The Tipping Point, their first new studio album since 2004. It is now in this week's race for No.1, with Monday's midweeks sales flash putting the duo ahead of Central Cee. Tears For Fears last topped the albums chart in 1989 with The Seeds Of Love.

The intervening 17 or so years since 2004's Everybody Loves A Happy Ending have been somewhat tumultuous for the band. Orzabal‘s first wife Caroline passed away in 2017, while he suffered his own health scare around the same time, too. The group also changed management and while a series of recent tours have been acclaimed, Orzabal said that life on the road had made his relationship with Smith “stressed beyond anything natural”.

However, having regrouped, renewed their partnership – professionally and personally – and signed with Concord Recorded Music for The Tipping Point, Orzabal tells Music Week why Tears For Fears are ready to rule again...

You changed your management in the build up to making The Tipping Point, why?
"We changed to Full Stop Management and then all of a sudden, the lights went from red to green. Everything started coming together. So it's all about who you surround yourself with."

Talking of partners, you tried working with a series of songwriters to make the record, but eventually brought it back within the band. What was that process like?
“We started the album in LA with our guitarist, co-writer and co-producer, Charlton Pettus. We were sort of not quite sure what we wanted to do but [our old] management came in and had a listen and decided that we weren't going to get the album done with that guy and that studio, which was a little bit insulting. Nevertheless, we were open to experiment, so we started working with lots of different people. We would literally walk in the studio with nothing, and some of these guys would mock up a backing track on the go. I'm very good at coming up with a top line immediately, and pretty good with going writing lyrics pretty quickly.

"We Did I Love You But I'm Lost, which came out with our [2017] Greatest Hits that way. We did that with Dan [Smith] from Bastille in our studio in Battersea. That was literally done in two days. I mean, it took months to make it sound better, but the actual nuts and bolts of that song was done in two days. So we can do it. But I think we have a history of torment and torture [in the studio], starting from [debut album] The Hurting. That's when we do our best work. The immediacy of what I call speed dating songwriting is effective, we got a track on The Tipping Point called My Demons that way, but we needed heart and soul for the album. Which is how we came full circle and went back to the studio with Charlton. It was one of those happy endings."

Has that experience put you off the co-writing route, even for other people, for good?
"No, no. I've done a lot of that stuff. I enjoy it. I find being spontaneous very easy, and I can work quickly."

It sounds like the relations between you and Curt Smith are stronger due to this process?
"It does seem like we're almost back to where we were when we started. I didn't know what was going on at the time when I was writing The Hurting, but I guess it's sort of exploring my heart, soul and psyche a bit more, so it was great to have someone like Curt around because he was more of an extrovert, more of an optimist. That optimist/pessimist thing worked really well. Since all the things that happened in 2017, he's been great, really good. And, for some strange reason, he's suddenly become articulate as well. It's quite impressive."

Even at 60 years old, you can have a rejuvenation

This will be your first new album since 2004, when streaming was in its infancy. How are you set up for that side of the business?
"That's really been a game-changer. It's just remarkable, the outreach your material has nowadays compared to before. Then, if radio didn't pick you up, you were kind of doomed. Now we're going straight to YouTube and straight on to all the streaming services, and immediately you see results. There has been that kind of snowball effect, where new songs start to interweave and interact with your past material. That whole thing is very exciting."

Rivers Of Mercy from the new album feels like it could be a stand out…
"It’s my favourite track! It has that emotional honesty. That was the track for me which most expresses letting go of whatever you're feeling, which is what you have to do. When all these horrible things happen, you have to try to reach a point where you just give in and let the river carry you.”

You've toured a lot in recent years, how do you think The Tipping Point songs will change the live show?
"I think it's the missing element. We have got all those big hits, certain songs which you have to play – we're never not going to play them. We found ourselves, because of the popularity of Mad World with Gary Jules, putting that in, along with some of the interpolations that have been coming around, like Kanye West. Now  I'm really looking forward to adding some of The Tipping Point songs to those. Songs like Break The Man, My Demons and End Of Night will be amazing live because they're so uptempo. I've already got an idea in my head of what track we're starting with. We'll walk on to the intro of the title track. It all works perfectly. Then we're spoilt for choice."

Does this new album feel like the beginning of a new era for Tears For Fears?
“Absolutely! There's no question about it. I don't know how I can put it… There was a little bit of a death, not just the people I knew, but the death of Tears For Fears too. It had been trying to maintain itself but it fell apart. This, now, is the coming together. This is the reinvention and rejuvenation. Even at 60 years old, you can have a rejuvenation. Also, this is us, warts and all, you know what I mean? This is kind of a more honest representation of who we are at our period in life. It's important to be honest, about what you know, how you are, who you are and the difficulties that come with ageing and stuff like that."

Fittingly you're selling socks emblazoned with Tipping Point lyrics "Life is cruel" as merch. Do you own a pair?
“So clever. The socks were not my idea, but I will be wearing them!"