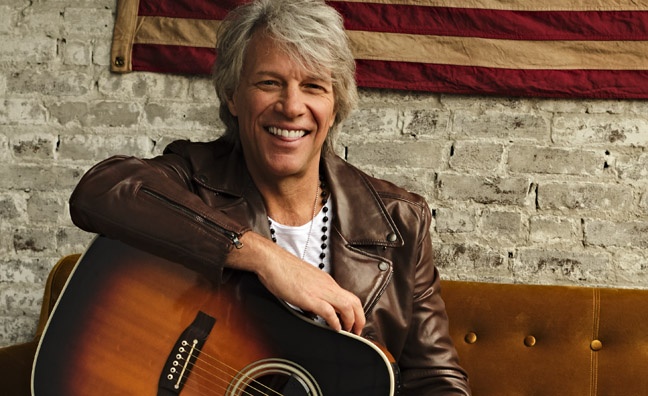 You’ll have heard a lot about rock in the streaming age lately.

Music Week’s exclusive research of Official Charts Company figures showed that the genre continues to underperform the market on streaming, rising just 3.1% year-on-year compared to a 14% increase for all streams.

Meanwhile, only one song released in 2020 – Parasite Eve by recent Music Week cover stars Bring Me The Horizon, who have consistently bucked the streaming trend – made the year’s Top 100 hard rock streaming songs, as classic tracks continue to dominate.

But what if you are the writer and performer of some of those classic tracks? Bon Jovi are doing very nicely in the digital age, with three songs on that most streamed list – Livin’ On A Prayer at No.4 with 24.7 million streams; You Give Love A Bad Name at No.28 with 10.9m; and Wanted Dead Or Alive at No.55 with 6.5m.

Frontman Jon Bon Jovi features in the new issue of Music Week, talking about his bid to reunite the United States with his most socially aware album to date.

But he also had plenty to say about the modern digital music biz and how rock can bridge the gap to other genres.

“I was here for the goldmining years, the ‘80s, when you could sell 20 million copies of one album,” Bon Jovi said. “It was absolutely fascinating. It made me very successful and then I remember the slump after Napster and the creation of the iPod. I railed against Steve Jobs for breaking up my album.”

My catalogue’s value has doubled because of streaming

“Catalogue values were nosediving,” he said. “But suddenly my catalogue’s value has doubled. Because of streaming! Now my songs get played a lot.”

But even Jon Bon Jovi admits that the new environment takes some adjusting to.

“Where we come from, an album has a beginning, a middle and an end and you present it as such,” he said. “Not the new world order where it’s streaming and you have a track at a time. I’m not concerned with two-and-a-half minute singles.”

The rock superstar said he realised the format was changing music when his son turned him on to Lil Nas X’s Old Town Road.

“It’s like, two minutes long and it’s only a chorus,” he laughed. “You listen to those songs and go, wow, that’s what they’re doing, because there’s something in the algorithms for streaming,” he says. “But I knew that formula in my time and that’s how I wrote. I remember an A&R girl saying to me before I even had a record deal, ‘Don’t bore us, get to the chorus’. I never forgot that.”