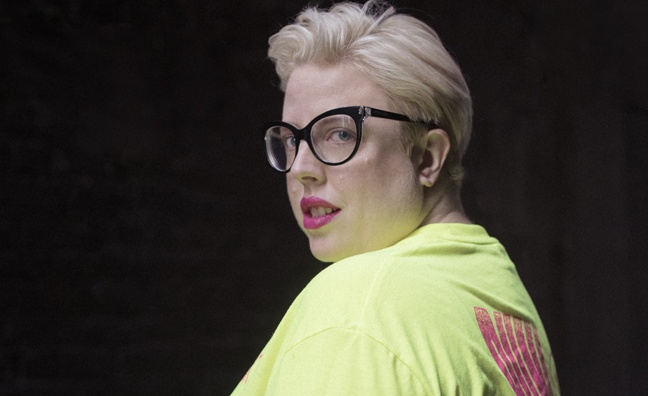 Dua Lipa is the Music Week 2020 Artist Of The Year, but the singer-songwriter is the first to acknowledge that pop megastardom is a team game.

In this week’s much talked about Music Week cover story, Lipa and her team at Warner Records, Tap Music and beyond reveal how they worked together to deliver a sensational campaign for her Future Nostalgia album, despite the coronavirus restrictions.

And Lipa’s trusted army of musical collaborators also chip in, from co-writers/producers Stephen ‘Koz' Kozmeniuk and Clarence Coffee Jr, to The Blessed Madonna.

So Music Week sat down with Stamper to talk remix culture, Gwen Stefani and the actual Madonna…

How did you two meet?
“I had done a remix for her previously on the feature she did with Silk City [Electricity]. That had gone really well and we briefly met at Glastonbury Block9. It was quite messy, I was in it! We have a bunch of people in common through production stuff and other industry things. When Future Nostalgia came out, she reached out and the idea was that I would make an old school radio style megamix. I could chose the remixers, do remixes myself, add in other samples and layers. I was of course delighted.”

How do you feel about the original album?
“Future Nostalgia was already on heavy rotation at my house, it was the lockdown record for me as it was for a lot of people and I was so proud of her for rising to the occasion and releasing an album in that environment that had real impact, was so well written and executed. So I already knew all the songs and, while we were spitballing about remixers, some of the people I had wanted they had already reached out to as potential remixers. Including people who are much more underground that some people would assume. So we were in the same headspace."

I would never dare to think of it as improving on Future Nostalgia, all I could do was reimagine it as a fictional universe

Did it feel like trying to improve on perfection?
“If I had framed it that way in my mind it never would have gotten done! It had to live in the Duaverse but have its own life and exist independently of the original. The idea was to expand the territory not to improve on it, have it be more of a fever dream of a thing that already existed. I would never dare to think of it as improving on that record, all I could do was reimagine it as a fictional universe. It became a kind of speculative fiction. You know people are going to have feelings about it. She has a very strong youth contingency in addition to all the adults who love her. You’re going to be taking them to a world they’ve never been to – and they may not even want to go to! But we all knew that we were returning to real remix culture when great DJs would work with pop artists and make truly great dance records. That was always the goal. We know those records are different, they’re not meant to improve on the original, they’re meant to take a concept and reinterpret it in another world and give a new context.”

What was your reaction when Madonna agreed to appear on the Levitating remix?
“It was terrifying! There are pop stars and then there is Madonna. She is a continent unto herself in the pop universe. There are very few people in this world who get to announce themselves with one name and Madonna is one of them. There are very few people who are truly that big and, for me, as a person who grew up with Madonna from the very beginning, I can not overstate what a big fan I am. So it was scary and thrilling and ultimately really rewarding. There were a lot of enormous email chains and panicked FaceTimes and text messages, it’s complex to make a record with people of the calibre of Madonna, Missy Elliott and Dua Lipa even if you’re in the same room. It’s even more complex when all of those people are recording their parts separately! Most things that get a big release like this have a whole bunch of people working on them, but that was not the case with this. It was just me in my pyjamas.”

And Gwen Stefani was also involved…
“That version of Physical is so unbelievable. Mark [Ronson] is so brilliant, when he sent me that I was like, ‘Dude, this is like butter!’ Gwen Stefani was a last minute thing. We were basically done and I was sitting doing embroidery in bed and Dua called me and said, ‘Hey, I think Gwen wants to be on this, do we have time?’ And I was like, ‘We’ll make time – do it!’”

And then there’s Dua herself. How was it working with her?
“It was amazing. I come from a very different world. I love pop music, but I wasn’t sure if pop music would love me, so I was prepared to be told to fuck off. But it just didn’t happen. She genuinely loved it. It’s a very sophisticated and smart blend and I’m just glad she didn’t tell me to go to hell! For something like this to have 50m streams on Spotify is bonkers! It was an incredible experience to make a record like that. Levitating is exactly the kind of record I would have made on my own, but then to have it get played all over the world is crazy.”

Will you work with her again?
“I admire her so much and I’ve been very lucky that we’ve had a great relationship so far. I very much look forward to whatever comes next. She’s just a superstar and it’s lovely that she’s genuinely the loveliest, most thoughtful person. If I had been endowed with the grace and charm and beauty that she has at such a young age – or at any stage in my life – I would be very grateful for it, but she just seems to float over the noise. I don’t know how she does it, but I admire it greatly. It’s been a great working relationship and I would follow her to the end of the earth.”