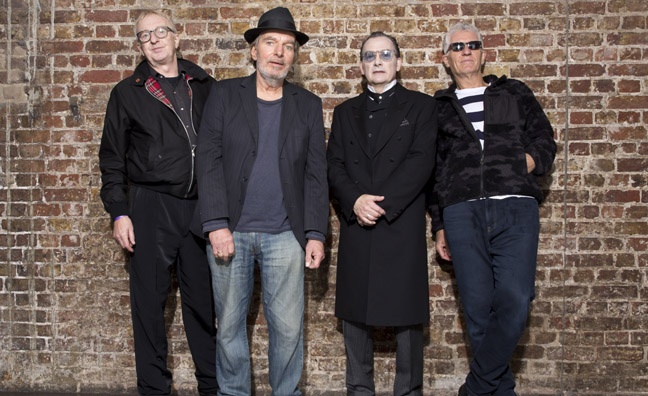 Punk legends The Damned will reunite their original line-up for a one-off tour next year.

The band held a socially distanced press conference – billed as the first such event since the UK went into its lockdown in March – at the Roundhouse in London on Wednesday (October 21) to promote the dates, which will kick off on July 9, 2021 at London’s Eventim Apollo.

Carefully-marshalled restrictions saw journalists seated several metres apart, wearing official Damned masks and having to convey their questions through an PR to avoid sharing a microphone (“Don’t shout!” ordered compere Don Letts). No wonder Outside Organisation PR boss Alan Edwards dryly noted that, “It was not like this at the Roxy in 1977, there was no social distancing at all then!”

Still, when the band – Dave Vanian, Rat Scabies, Captain Sensible and Brian James – appeared, they managed to bring some good, old-fashioned anarchy to the occasion.

“They said it could never happen,” scoffed Sensible, who later reminisced with Music Week about checking our charts pages for news of his solo career success. “So much for animosity and malice between this bunch of individuals – nobody thought we’d ever get back together again, but here we are!”

No one in the band seemed too clear about exactly when or where the gigs were scheduled for, with Vanian noting that the coronavirus pandemic makes it “probably the worst time to try and get the band together”. But the prospect of one last chance to seen the punk originals should galvanise fans who will be desperate for live entertainment when lockdown finally ends.

“We caught the tail end of a golden period for rock’n’roll,” added Vanian. “It was bloody good fun; the booze, the birds, the rock’n’roll and all the rest of it, the abandon and the lunacy. We’re hopefully going to bring a bit of that back.”

The Damned have already enjoyed a late career renaissance with a different line-up under the guidance of rock management powerhouse Raw Power, scoring a first-ever Top 10 album in 2018 with Evil Spirits (Search And Destroy/Spinefarm). That album has sold 12,870 copies to date, according to the Official Charts Company.

But, by the time the gigs roll around, the band will almost be ready to celebrate the 45th anniversary of UK punk rock’s first single, New Rose, which came out in October 1976. The Damned were also the first UK punks to release an album, Damned Damned Damned, in 1977 and the first to tour the US.

“It’s not just music, it encapsulates a whole era that we’ll possibly never see again,” said Vanian. “And while we’re still relatively upright we should do something.”

“I’ve got enough regrets in my life,” said Scabies. “This is one regret I’m really pleased I’m not going to have.”

For now, though, the assembled music journalists were just happy to have an excuse to leave the house. The long hot punk summer of 1976 seems a very long way from the never-ending lockdown winter of 2020, so for punks young and old these reunion shows can’t come fast enough.